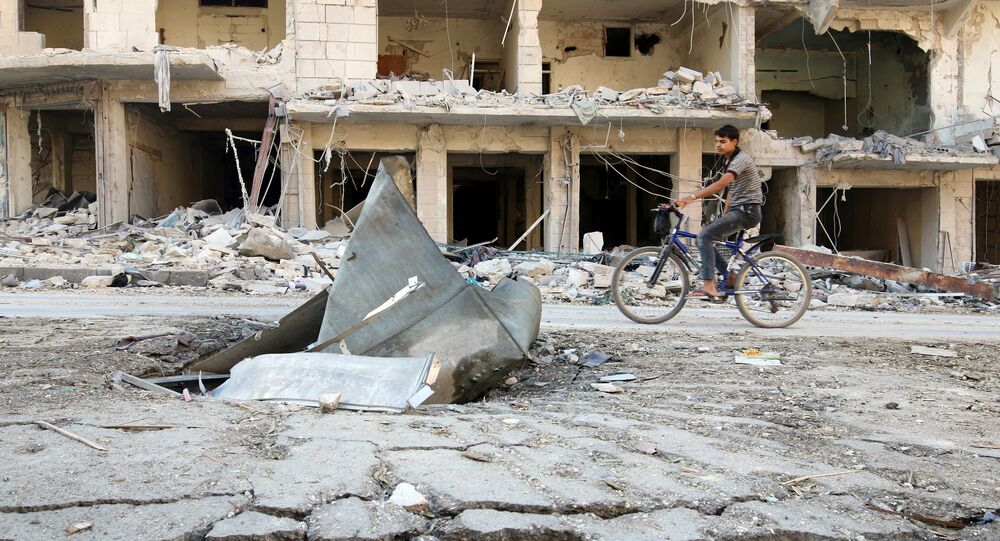 Russia is ready to extend the humanitarian pause in the besieged Syrian city of Aleppo as long as needed, Russian President Vladimir Putin said Thursday following talks in Berlin.

© AFP 2020 / KARAM AL-MASRI
Militants Constantly Attack All Humanitarian Corridors in Aleppo
The Russian president added that the suspension of airstrikes could continue "until the terrorists in the city intensify their activity."

"We hope that our partners, first of all the United States, will do everything they’ve pledged to do to separate al-Nusra Front and other terrorist groups from opposition forces," Putin underscored.

Later on Thursday, Russian Foreign Minister Sergei Lavrov discussed with his US counterpart John Kerry the situation in Aleppo in a phone call. In particular, Lavrov told Kerry about the conditions to extend the humanitarian pause.

"The heads of the foreign ministries […] discussed the ways to normalize the situation in the eastern part of Aleppo, where Syria's government forces and Russia's Aerospace Forces have announced a humanitarian pause in their military operations and are ready to extend it if al-Nusra Front and illegal armed groups that have joined it do not violate the ceasefire regime," the Russian Foreign Ministry said in a statement.

© Sputnik / Michael Alaeddin
Humanitarian Pause in Syria’s Aleppo ‘Good Sign’ - US State Department
The humanitarian pause was introduced in Aleppo at 08:00 local time (05:00 GMT) on Thursday to ensure the safe evacuation of unarmed militants, and civilians from eastern Aleppo via eight designated corridors. Earlier in the day, Russian Defense Minister Sergei Shoigu announced that Moscow had decided to extend the humanitarian pause in Aleppo for another 24 hours.

However, the humanitarian pause in Aleppo may raise eyebrows, taking into account the fact that it was declared at a time when the Syrian Army was close to take control over the city, an article in the Russian online publication Svobodnaya Pressa read.

According to Frankfurter Allgemeine Zeitung, Washington does not have resources to further support militants in Aleppo. They cannot stand against the Syrian Army and the Russian Aerospace Forces.

© Sputnik / Ramil Sitdikov
Russia Calls for Cooperation With US in Fighting Daesh in Syria - Russian Upper House Speaker
At the same time, the future of Syria depends on the result of the battle for Aleppo. If the Syrian government retakes control over the city this would seriously bolster President Bashar Assad’s positions, the newspaper noted.

The humanitarian pause in Aleppo is a sign that Russia and the United States are ready to bargain over the division of spheres of influence in the Middle East, said Sergei Ermakov, a senior analyst at the Russian Institute for Strategic Studies.

According to the expert, the Middle East is a region where Moscow and Washington has common interests.

"Both Russia and the US needs a victory in the region. In fact, the battle of Aleppo and the liberation of Mosul in Iraq demonstrate the demarcation of zone of influence in the Middle East along the Russia-US line," he told Svobodnaya Pressa.

By declaring the humanitarian pause in Aleppo, Russia proved that it is acting im compliance with international law, including providing corridors for the residents of a besieged city, Ermakov added. Moreover, the pause could be used by the Syrian Army to reinforce and regroup.

The pause in combat in Aleppo also has practical goals, said Mikhail Alexandrov, a senior analyst the Moscow State Institute of International Relations.

"According to the Defense Ministry, militants who laid down arms are leaving the combat zone via the corridors. This is going to facilitate the upcoming assault on Aleppo. The more militants will leave the less efforts are needed to regain control over the city. The pause would also help decrease the number of civilian casualties," Alexandrov pointed out.