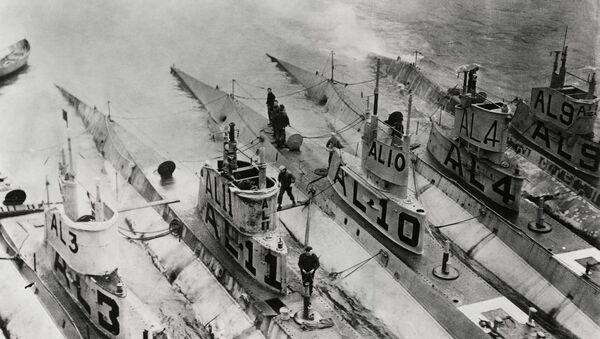 After lying submerged for nearly 100 years, a German U-boat that legend holds was sunk by a sea monster appears to have been found off the Scottish coast.

Engineers making preparations to lay subsea power cables came across the surprisingly intact sub while working off Scotland's far southwestern coast. The wreck has been confirmed as a UBIII-Class submarine, meaning it is either UB-85 or UB-82, two German U-boats known to have been sunk while prowling the UK coast toward the end of World War I.

The official story of the demise of UB-85 holds that the lethal sub was caught in April 1918 by the HMS Coreopsis, a British patrol boat, and was flooded and forced to return to the surface while trying to evade fire. The German crew then surrendered without resistance.

The unofficial story, however, is rather different. Sailors whispered that the British boat came upon the U-boat simply floating on the water, and that its crew surrendered immediately. Once on board the Coreopsis, the German submarine captain said his boat had been disabled by a "sea monster."

Innes McCartney, a historian and nautical archaeologist who helped identify the sunken ship, told the BBC, "In reality, the real sea monster was the U-boat, here trying to sink ships."

McCartney was quoted by Scottish Power in their October 19 statement on the find. "Unless a diver can find a shipyard stamp, we cannot say definitively [which boat the wreck is] but yes, we're certainly closer to solving the so-called mystery of UB-85 and the reason behind its sinking – whether common mechanical failure or something that is less easily explained," he said.

This is not the first German submarine Scottish Power has found: a crew discovered the World War II submarine U-31 at the beginning of this year.

The survey that uncovered the wreck was being done for the Western Link project, a joint venture between Scottish Power and National Grid to bring renewable energy from Scotland to England and Wales.

Graham Edwards, Western Link project director, said in the Scottish Power statement, "During construction we take great care over archaeology, whether on land or at sea, and it's always exciting to record a significant find and help to shed new light on our history – especially one with such an amazing tale involved!"