Trio of Physicists Awarded With Nobel Prize for Unexpected Discovery 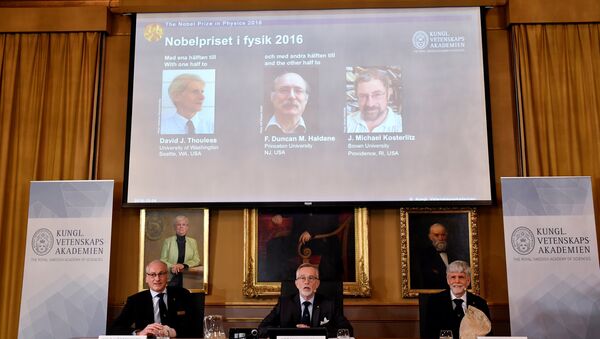 The 2016 Nobel Physics Prize was awarded to a trio of British-born researches for their pioneering work in the study of exotic states of matter. The groundbreaking discovery is believed to be applied in the future for quantum computers, new superconductors and creation of innovative materials.

Phase transitions describe changes in the properties of a material, like progression from ice to water and then to steam in the world around us when the temperature rises. Thouless, Haldane and Kosterlitz demonstrated that abrupt changes can also happen in the electrical properties of materials.

The trio studied phenomena that occur on surfaces or inside extremely thin layers that can be described as two-dimensional. Variations in the atomic structure can result in materials obtaining unusual electric properties.

Science & Tech
Physicists Discover Ferroelectricity in Water Molecules Encaged in Emerald
The trio used topological concepts to describe why those changes occur step by step. In topology, objects are divided into classes, depending on the number of holes they have and there can be no intermediate phases, like half of a hall. The electrical properties also change in integer steps, like in a superconductor which at extremely low temperatures conducts electricity without any resistance.

Commenting on the award, Princeton University physicist Haldane said that like many other scientific discoveries his finding was in a way accidental.

"At the time, I thought it was of scientific interest and mathematical interest, but I didn’t think it would ever find a particular realization. I basically stumbled on this playing with mathematics," he said, referring to the experiment he conducted in the 1980s.

"You never set out to discover something new. You stumble on it and you have the luck to recognize that it is something new," the scientist added.

CERN's Large Hadron Collider Keeps Churning Out Pentaquarks
In the 1980s, Thouless managed to explain his previous work with thin electrically conducting layers in which conductance was measured in integer steps. Haldane demonstrated that concepts of topology can be applied to understand the properties of chains of small magnets in certain materials.

Like his colleagues, Haldane expressed hope that their discovery would be useful in material science and electronics.

Their scientific work can be very useful because Haldane, Thouless and Kosterlitz discovered a new state of matter and new topological insulators, said Artem Oganov from the Moscow Institute of Physics and Technology (MIPT).

"The newly discovered materials could be broadly used. Their work provides a new vision of the electronic structure of matter. Topological insulators are expected to be very important in quantum computing," Oganov told the Russian online newspaper Vzglyad.

However, as for now, they are not practically used, he noted.

"The study is based on materials that can be found in nature, such as graphite or bismuth telluride. It’s hard to say when they will be used. It’s like the case of graphene. So much money has been spent on it and so much theoretical work has been done. But all these new materials are very complicated. They are unlikely to be quickly introduced into our daily life," Oganov pointed out.