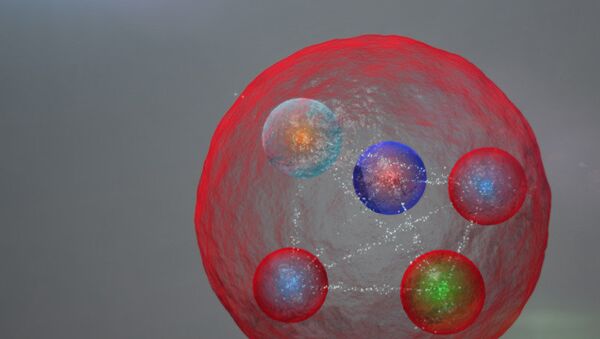 © CERN
Subscribe
International
India
Africa
Scientists studying data from the Large Hadron Collider experiment have announced further evidence of pentaquarks, a new type of particle discovered by scientists in 2015 after a half-century of searching.

Eerie Photo Fuels Internet Theory That CERN is Opening 'Portals of Hell'
Scientists have discovered further evidence of pentaquarks in the course of two more studies at the European Organization for Nuclear Research (CERN) in Geneva, Switzerland.

Researchers collaborating on the LHCb experiment at CERN's Large Hadron Collider first announced the discovery of the pentaquark, a new type of particle containing five quarks in July last year.

"The pentaquark is not just any new particle," said LHCb spokesperson Guy Wilkinson.

"It represents a way to aggregate quarks, namely the fundamental constituents of ordinary protons and neutrons, in a pattern that has never been observed before in over fifty years of experimental searches. Studying its properties may allow us to understand better how ordinary matter, the protons and neutrons from which we’re all made, is constituted."

On Thursday, the journal APS Physics published two studies which further corroborate the existence of pentaquarks.

"One study demonstrates that the evidence for pentaquarks in the discovery data is model independent. Another reports evidence for exotic hadronic particles—whose properties are consistent with those of the previously observed pentaquarks—in a new particle-decay channel," APS reported in a synopsis of the two papers.

Quarks, along with leptons, are subatomic particles, the fundamental building blocks of matter. Most of the matter we see around us is made from protons and neutrons, which are composed of quarks.

It's a Tetraquark: Scientists Welcome New Particle Into the World
Quarks come in six "flavors," and had been thought to exist only in combinations of two (a meson) or three (a baryon). However, the LHCb experiment at CERN has led researchers to discover exotic new kinds of quark combinations.

The pentaquark is formed of two up quarks, one down quark, one charm quark and one anti-charm quark.

LHCb researchers also reported the observation of tetraquarks earlier this year, which seem to be formed from four quarks:  two quarks and two antiquarks.

The quark model was first put forward by American physicist Murray Gell-Mann in 1964. He proposed that baryons, a category of particle which includes protons and neutrons, are formed by three fractionally charged objects called quarks. He also said that another category, mesons, are comprised of quark-antiquark pairs.

The model allows the existence of other quark formations such as tetraquarks or pentaquarks, but the LHCb experiment has allowed scientists to observe them for the first time. 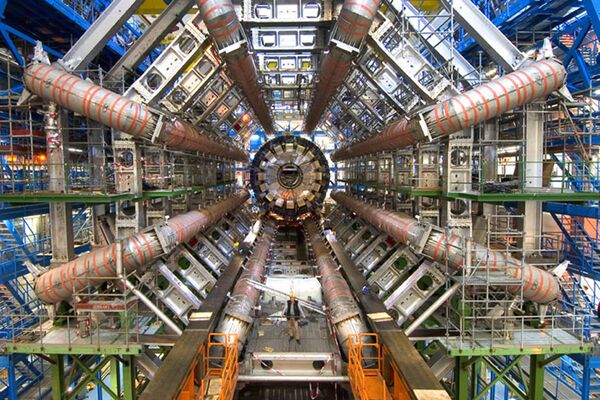 Large Hadron Collider
© Flickr / UCI UC Irvine
LHCb is one of seven particle physics detector experiments at the Large Hadron Collider, the world's largest and most powerful particle accelerator. It consists of a 27-kilometre ring of superconducting magnets which create a strong magnetic field. Two high-energy particle beams are guided in opposite directions by the magnets, and travel at close to the speed of light before they are made to collide.
Newsfeed
0
Access to the chat has been blocked for violating the rules . You will be able to participate again through:∞. If you do not agree with the blocking, please use the feedback form
The discussion is closed. You can participate in the discussion within 24 hours after the publication of the article.
To participate in the discussion
log in or register
loader
Chats
Заголовок открываемого материала