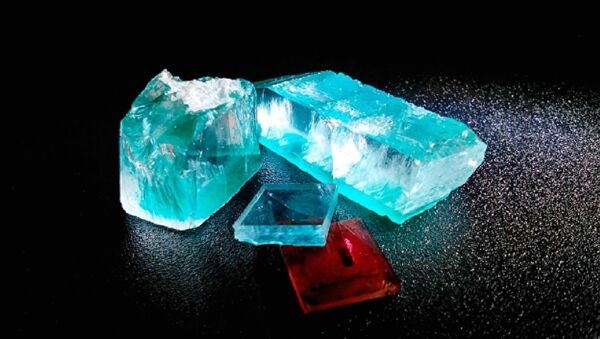 A group of scientists from the Moscow Institute of Physics and Technology (MIPT) and other Russian and international universities have managed for the first time to "confine" water molecules inside a beryl crystal.

Russia
Scientists Find a Way to Destroy Blood Clots With Laser Beam
The results of the study were published in Nature Communications magazine.

"As for practical use of the discovered phenomenon, it can be used in a wide range of fields. The researchers examined how this phenomenon is affected by various factors, including temperature, pressure and ion encirclement. The team made progress in understating the role of this phenomenon in different natural process and biological systems," Boris Gorshunov from the MIPT told RIA Novosti.

Gorshunov and his colleagues have made a significant step to discover of the greatest mysteries of water – the conditions resulting in incipient ferroelectricity in the water molecules, resembling electricity in ferroalloys.

Ferroelectrics are widely used in developing electronic instruments and for high-performance and super endurable ferroelectric RAM (FeRAM) memory. In the near future, this type of memory is expected to become very popular in the market. In recent years, scientists have discovered dozens of types of ferroelectrics. They are characterized by large electric dipole moment.

Science & Tech
Russian Scientists Develop Unique Plasma Generator
In physics, the electric dipole moment is a measure of separation of positive and negative electric charges within a molecule. For example, a water molecule is characterized by large electric dipole moment because the electrons are bound very close to the oxygen atom while the positively charged hydrogen atoms are distant from them.

In theory, the large electric dipole moment of a H2O molecule should turn water into a perfect ferroelectric. However, in fact this does not happen. Hydrogen bonds screen the dipole–dipole coupling and suppress the ferroelectric order, according to the study. For this reason, previously scientists studied water’s ferroelectric characteristics only in theories and models.

Russia and foreign scientists discovered a way to confirm those theories by disrupting the hydrogen bond network.

Science & Tech
Russian Physicists Invent New Nanoparticles for Futuristic Light-Based Computing
In order to manage that, Gorshunov and his colleagues embed water molecules into the crystal lattice of emerald and other beryl minerals.

"Crystals grown in an aqueous environment contain water trapped in the framework of the crystal lattice in such a way that single H2O molecules reside within the cages; the molecules are trapped in the cages during the growth process, that is, when the cages are formed, and may diffuse to neighboring vacant sites," the study read.

According to the scientists, experiments prove that such "confined" water does acquire ferroelectric properties.

"This type of confined-water ferroelectricity is believed to play a significant role in various phenomena and areas of natural sciences (for example, geology, mineralogy, meteorology, soil chemistry, biology, pharmaceutics, food industry and materials science), including the living organisms (water in cells and membrane channels, and proteins hydration shells) and even in the universe (formation of planets or of prebiotic compounds)," the scientists wrote.