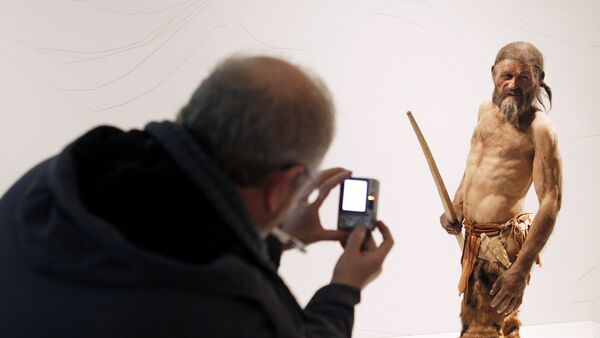 Will 5300 Year Old Iceman Mummy Lead to Cancer Breakthrough?
Ötzi, also known as the Iceman or the Similaun Man, was discovered in 1991 by two German tourists at an elevation of over 10,000 feet on the east ridge of the Fineilspitze in the Ötztal Alps on the Austrian–Italian border.
The tourists at first thought they'd stumbled upon the remains of a recently deceased mountaineer, but after the cadaver was recovered and delivered to the Innsbruck medical examiner’s office, its true nature was finally discovered.

Ötzi, named after the region the mummy was found in, turned out to be the remains of a Chalcolithic man who lived around 3,300 B.C. The man was apparently 45-46 years old at the time of his death, and his personal belongings, including a copper axe. His tool, along with the high levels of copper particles and arsenic found in his hair, led scientists to believe that Ötzi was involved in copper smelting.

Now, during a conference dedicated to the 25th anniversary of the discovery of Ötzi, Italian scientists revealed that they’ve managed to replicate the Iceman’s voice.

Researchers pointed out that while they can’t be certain that they managed to achieve an exact 100 percent replication of Ötzi’s voice, by measuring the length of his vocal cords and vocal tract they've been able to create what at the very least should be a very close approximation of it.

As writing didn’t yet exist during the Chalcolithic period, archaeologic research essentially remains the only way to obtain information about human interaction and day-to-day activities during that time. Even though scientists have been studying Ötzi ever since the mummy was found a quarter-century ago and have managed to obtain a trove of valuable information in the process, too many questions remain as-yet unanswered, so the Iceman affair is clearly far from over.