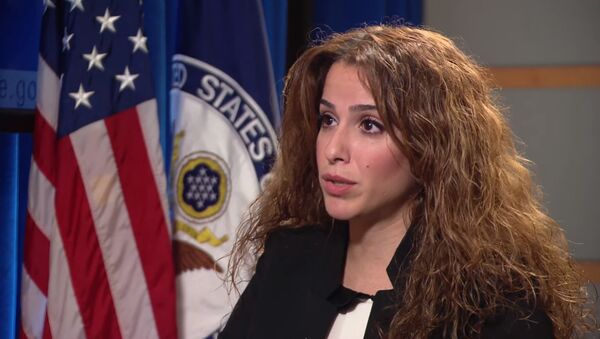 © Photo : Youtube / capture d‘écran
Subscribe
The recent appointment of Iranian-American Sahar Nowrouzzadeh as Persian spokesperson for the US Department of State is likely to help improve the dialogue between Washington and Tehran.

Nowrouzzadeh, who was born in Iran and moved with her family to the US as a child, is well known for her public activity aimed at improving relations between the United States and Iran. Her appointment may be considered a good sign for those who hope the two countries will forge closer ties.

​Nevertheless, editor-in-chief of the newspaper Iran Press, Emad Abshenass, told Sputnik that it is still too early to speak about an Iranian lobby of any kind being established in the US establishment.

"It’s no secret that Iranians would like to follow the example of certain countries and establish an influential lobby in the upper echelons of the United States. However, the Israeli and Saudi lobbies already hold sway in the American establishment, and they won’t allow Iran to gain a foothold there," he explained.

At the same time, he pointed out, Nowrouzzadeh is a capable diplomat who appears genuinely interested in improving relations between Iran and the US, and who, despite growing up in America, never lost touch with her ancestral homeland where she was born.

"Ever since she started working in the State Department, Sahar Nowrouzzadeh, who is also a member of the National Iranian American Council, has done everything to help improve relations between the US and Iran. Thanks to her activities, she's become a popular figure in the US. Her diplomatic and negotiating skills also helped her become a member of the US team participating in the negotiations regarding the Iranian nuclear program. The talks between Sahar and Iranian President Hassan Rouhani’s brother, Hossein Fereydoun, helped clear a number of contradictions and allowed the entire endeavor to succeed," Abshenass said.

All in all, he remarked, Nowrouzzadeh's new post may not exactly mark the creation of Iranian lobby in the US, but it will definitely help improve relations between the two countries.

"Now that Nowrouzzadeh occupies such a high position, Iran will be granted a greater opportunity to influence US politics. While it’s still too early to talk about an Iranian lobby (at this point one can only imagine how to lay foundations for it) it will be much easier now for Tehran and Washington to engage in meaningful dialogue," Abshenass surmised.