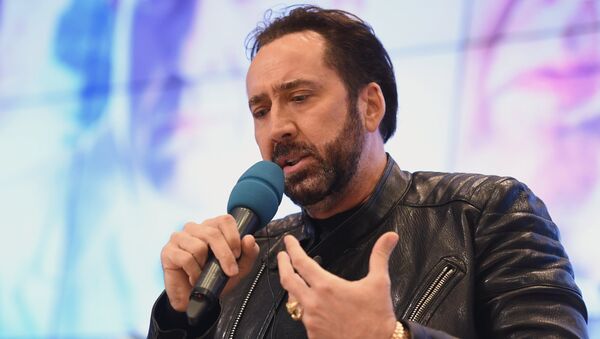 Despite the fact that it was raining in Moscow, Nicolas Cage seemed excited to be in the city, saying that he “wished he had visited Moscow earlier.”

In his interview, Cage discussed how meeting with one of the survivors of the crew members had helped him portraying Captain McVay.

“Anytime you can get words from someone who was actually there and they can describe the experience to you, it only helps in forming the performance. Sometimes I let the words sink in and I go to bed at night and use my imagination and I would have a dream about what they described to me.”

Cage further said, “This one guy told me that all he had was his faith and a potato. I kept having images of him in the water for four days holding a potato and how this potato kept him alive. It was so abstract but at the same time it helped because that kind of detail helps reach authenticity for a performance.”

He recently also played in the film Snowden and talked about his work in the movie based on real events or real people, saying that he tries to be as involved as possible in order to make it completely authentic.

He further said that when he makes a movie he wants everyone at the table to come and discuss and not to alienate one side from another side.

Talking about what is the hardest part of his job as an actor, Cage said that for him one of the most important things is to “stay fresh, excited and stay interested.”

Cage also said that he has done a lot of movies, over 80 movies and because of that he feels that he needs to keep going and finding things that stimulate and excite him.

At the end of the interview, Cage tried his hand at Russian and recalled only one word Dosvedaniye [good bye]. He said that he knew more Russian words when he did the film “Lord of War.”