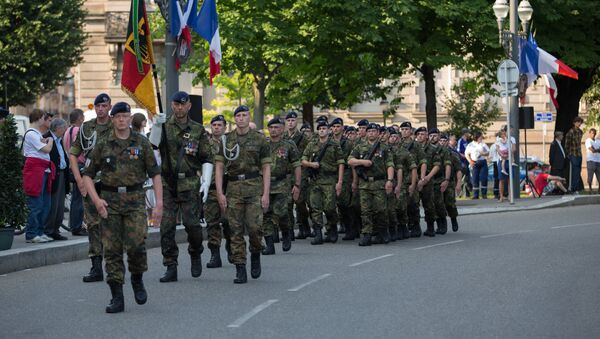 As leaders gather for the EU Summit in Bratislava where they are set to discuss the recently-proposed initiative to create EU defense union, one Serbian military analyst tells Sputnik that the US will never accept a strong European partner within NATO as it is a political challenge to the security architecture of the whole of western civilization.

US to 'Do Its Utmost' to Hinder Set-Up of Independent European Army
Commenting on the recent suggestion of European Commission President Jean-Claude Juncker to set up a single military headquarters within the European Union and further work towards a common military force, military analyst from Belgrade Aleksandar Radic told Sputnik that the proposed idea might become a unifying factor for the block, which it can demonstrate to the world.

He said that the future European army could use the template of the Franco-German Brigade, a special military brigade of the Eurocorps of the European Union, founded in 1989, jointly consisting of units from both the French and German armies.

This particular template could be applied in cooperation with NATO, it will be some kind of a parallel unit within the alliance.

"Despite the effective implementation of the European ambitions, NATO simultaneously poses a serious obstacle on the way to the creation of a European army, as from a political point of view it will lead to the reconsideration of the role and the major tasks of the alliance," the military analyst told Sputnik.

"We could even imagine the incorporation of the EU army within NATO structure but it would be the US and certain Eastern European countries which rest upon Washington, who would strongly oppose the idea," he added.

EU Defense Union Will be 'Alternative to NATO, Prevent Mass Purchases From US'
Commenting on the economic aspect of the idea that it would save Europe money otherwise wasted on separate military missions,  Aleksandar Radic said that this was just an excuse, as throughout the last decade the European countries have considerably reduced the percentage of their gross domestic product (GDP) spent on defense needs.

He added that if compared to the money spent on funding the military 25 years ago, recent military spending has decreased by a half.

"However the most serious issues with the creation of the EU army lie not in the economic but in the political sphere," the expert said.

"It is absolutely impossible to imagine that Washington would agree to a strong European partner within NATO as this can alter the security architecture of the whole of western civilization," Radic explained.

The expert also pointed out that if agreed upon, the creation of the European army is a long-term project. Its final set-up might take decades, however formally it might be established in any suitable political moment.

"Decades are needed to set up a solid, clear idea which will unite all the [European] armed forces. However the cooperation within NATO would be the best basis for establishment of such a defense union," the expert finally stated.