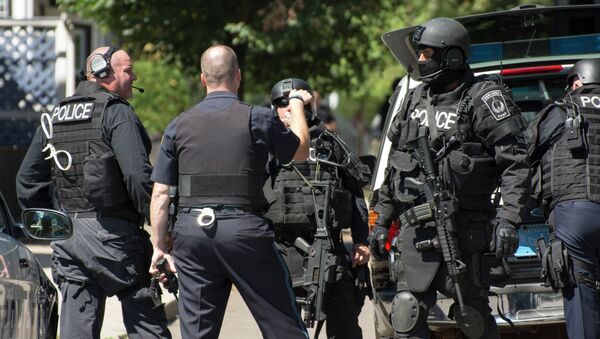 A Colorado police department issued an apology after a SWAT team raided the wrong house, which had five children inside, aged three to 12 years old.

Unarmed South Carolina Teen Shot in Back by Cops During Marijuana Raid
On Tuesday, Mesa County and Grand Junction SWAT raided a family home looking for person suspected of running a methamphetamine operation, who previously lived at the address.

“We are deeply regretful of the experience to which this family was subjected,” Grand Junction police and the Mesa County Sheriff’s Office said in a joint statement.

“We have met with the family, including the children, to explain in detail how such a mistake was made.”

The team broke windows and busted down the door of the house before realizing they were in the wrong place. The family had been living at the home for approximately a year.

90-Year-Old Woman's Home Damaged After Cops Raid Wrong House
An informant had tipped off police that there were drugs and guns in the home, and where they were located.

“We got some pretty detailed information from (an) informant,” police spokeswoman Heidi Davidson told the Associated Press. “The name we were given was associated with the address. It just wasn’t current.”

The department will be replacing the windows, door, and carpet that was littered with broken glass.

“Believe me, our officers and deputies are extremely committed to accuracy, and no one wants to make a mistake like that,” Grand Junction Police Chief John Camper said.

Neighbor Joey Slaughenhaupt told KJCT 8 that he had witnessed law enforcement agents “all armored up” and pointing AK-47’s at the windows.

“I can only imagine being a kid, I wouldn't sleep for awhile,” he stated. “It's just bad for the kids in general. I don't know how you make that up.”