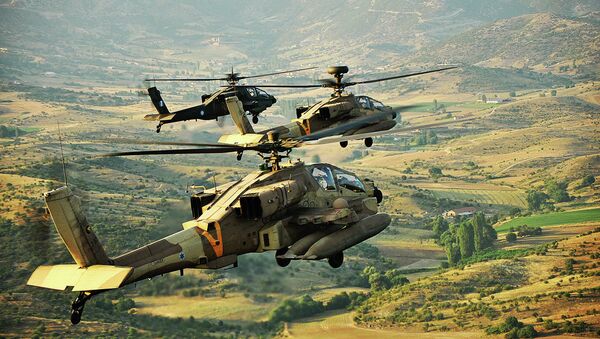 © Flickr / Israel Defense Forces
Subscribe
After months of negotiations, the United States and Israel have agreed on a new military aid package, the largest ever for the strategic partnership.

According to Israeli media, Yaakov Nagel, acting head of the Israeli National Security Council, is traveling to the US to sign a new military aid agreement this week. Sources speaking to the Jerusalem Post revealed that the US will supply Israel with at least $38 billion in military aid over the next ten years.

"The United States has concluded a new ten-year Memorandum of Understanding (MOU) with Israel on security assistance for fiscal years 2019 through 2028," according to the US State Department.

"This MOU constitutes the single largest pledge of bilateral military assistance in US history."

The two nations negotiated the agreement over the past year. One point of contention was how Israel would be allowed to spend the money, with the US insisting that the aid be paid back to American defense companies rather than local industries.

The new arrangement allows Israel to spend the money on its own defense firms for the first six years.

Tensions have been high between US President Barack Obama and Israeli Prime Minister Benjamin Netanyahu, particularly over the Iran nuclear deal, fervently opposed by the Israeli PM.

Netanyahu was reportedly holding out for a larger sum as recently as last month. Citing threats from Syria and Turkey, the Israeli leader was pushing for $50 billion.

Far below Netanyahu’s desired sum, the $38 billion is still an unprecedented amount for the US-Israeli, or any other, relationship, especially considering that, as a recent lawsuit claims, the defense packages may be in violation of US law.

Red Flag: Israel to Play in US War Games Alongside Pakistan, UAE

A suit filed by the Institute for Research: Middle Eastern Policy last month argues that Washington’s financial support of Israel violates the Arms Export Control Act, which prevents the US from authorizing aid to countries that are not party to the Nuclear Non-Proliferation Treaty.

"The billions sent to Israel annually have become such a centerpiece of US policy that it is virtually unthinkable that they would let a little thing like its over illegality get in the way," Jason Ditz writes for AntiWar.com.