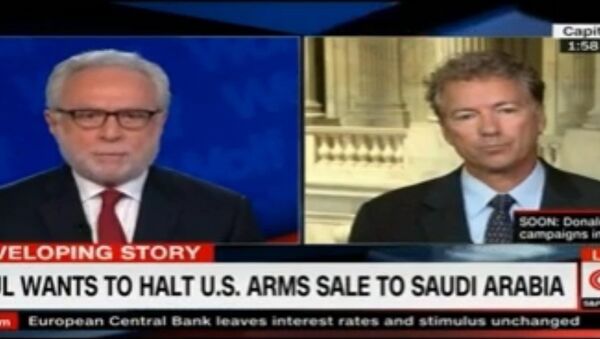 CNN anchor Wolf Blitzer has made the startling claim that Rand Paul’s call on the US to stop arming Saudi Arabia is immoral -- because the Republican Senator has not taken into account defence contractor job losses.

US 'Funneled Weapons to Terrorists' in Syria - Rand Paul
Senator Paul opposes selling additional weapons to the Middle Eastern kingdom, arguing that Riyadh was responsible for empowering extremists in the region and killing thousands of civilians with American bombs and missiles.

In spring 2016, alongside Senator Chris Murphy, Paul proposed a bill that would require Riyadh to follow safeguards to minimize civilian deaths in the Arabian Peninsula, during an ongoing Saudi-led bombing campaign that has seen over 4000 civilians killed.

Meanwhile, CNN's Wolf Blitzer expressed his concern, first and foremost about weapon builders' jobs, as opposed to acknowledging Saudi Arabia's human rights record. The anchor said Thursday that blocking a $1.1 billion sale deal would harm the US economy and cause fewer jobs for weapons manufacturers, distributors and retail sellers.

"So for you this is a moral issue. Because, you know, there's a lot of jobs at stake," he said to Paul during an appearance on CNN by the Senator.

"Certainly if a lot of these defense contractors stop selling warplanes, other sophisticated equipment to Saudi Arabia, there's going to be a significant loss of jobs, of revenue here in the United States. That's secondary from your standpoint?"

Paul stated that it was indeed moral question, noting also that it is a constitutional issue as well.

"Our founding fathers very directly and specifically did not give the president the power to go to war. They gave it to Congress. So Congress needs to step up and this is what I'm doing," he said to the cable-news host.

The Obama Administration has sold more weapons to the Saudis than any other administration, pledging favorable financing terms for over $115 billion worth of small arms, tanks, helicopters, missiles, and aircraft, as well as the logistical network to maintain them.