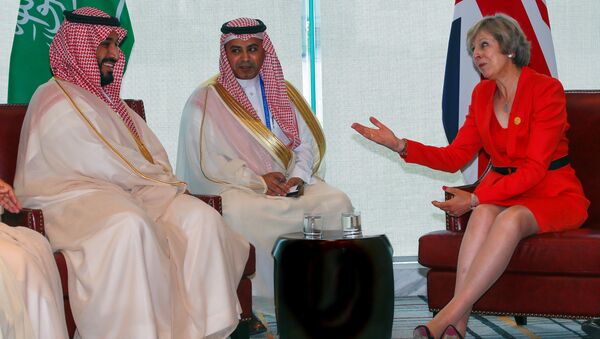 © REUTERS / Narendra Shresta
Subscribe
Prime Minister Theresa May defended the UK's close relationship with Saudi Arabia, despite mounting evidence that British weapons are being used in illegal attacks in Yemen.

On Wednesday, a draft report by the influential Parliamentary Committee on Arms Export Controls issued a damning indictment of the UK's foreign policy.

Rather belatedly, the parliamentary Committee on Arms Export Controls has started looking at Yemen.https://t.co/GOUGusgpTw#bbcpm @bbcpm

The report said it seems inevitable that the Saudi-led coalition, which has been fighting a bloody and protracted conflict in Yemen for 18 months, has been involved in illegal attacks using British-supplied weapons. This would make Britain culpable for violating its own legal obligations.

We need an end to arms sales to Saudi Arabia now & an investigation of allegations of breaches of IHL in #Yemen pic.twitter.com/88a5SQQ6C4

"The weight of evidence of violations of international humanitarian law by the Saudi-led coalition is now so great that it is very difficult to continue to support Saudi Arabia," the draft report says.

Despite this and the striking accusation that the UK should bear some of the responsibility for such bloodshed, Prime Minister May staunchly defended the UK-Saudi relationship. Speaking in the Commons on Wednesday, May said:

"Actually what matters is the strength of our relationship with Saudi Arabia on issues like dealing with terrorism, on counter-terrorism issues. It is that relationship that has helped to keep people on the streets of Britain safe."

Also on Wednesday, the Saudi Foreign Minister Adel al-Jubeir was in London. He too has claimed that if the UK were to withdraw support from the Saudi-led coalition in Yemen, the West would be more vulnerable to terrorism.

"I think it's no coincidence that Mr. al-Jubair was in London yesterday. He was specifically there to put pressure on MPs ahead of the committee meeting [the Committee on Arms Export Controls] in order to try and influence the committee to try and whitewash Saudi Arabia's crimes."

"And this goes broader: we should ask, what would it take for Mrs. May to stop supporting the Saudis, if the death of 10,000 people isn't enough?"

Labour leader Jeremy Corbyn chose to highlight the issue of the humanitarian cost of British arms sales, in a challenge to Mrs. May in Parliament on Wednesday.

"I remain concerned at the heart of this Government's security policy also is apparently increased arms exports to the very part of the world that most immediately threatens security," he told MPs.

"The British Government continues to sell arms to Saudi Arabia, which are being used to commit crimes against humanity in Yemen, which has been clearly detailed by the UN and other independent agencies. Will the Prime Minister commit today to halting arms sales to Saudi Arabia that have been used to prosecute this war in Yemen with the humanitarian devastation that has resulted from that?" Mr Corbyn asked.

Downing Street and the Ministry of Defense were unavailable for comment on whether there will be a suspension of future arms sales to Saudi Arabia.

However, in a statement earlier this week, British Foreign Secretary Boris Johnson has defended UK arms sales to Saudi Arabia, saying the Saudi-led bombing campaign in Yemen was not "in serious breach" of international humanitarian law.

"Having regard to all the information available to us, we assess this test has not been met."

'Toxic Relationship With a Brutal Tyranny'

The cross-parliamentary report is the latest in a growing barrage of condemnation of continuing arms sales between the UK and Saudi Arabia: worth US$3.7 billion since the conflict began.

'A shameful relationship': read our report on UK complicity in Saudi state violence and why we must #StopArmingSaudi https://t.co/0r8H18rxYY

A High Court judge in London ruled the Campaign against the Arms Trade (CAAT) has an "arguable case" that there had been an unlawful failure to suspend existing deals which could result in the weapons being used in the war in Yemen.

Andrew Smith from CAAT told Sputnik that the British public should be in no doubt that the government has broken international law.

"We have ample evidence from several agencies that have independently looked into this, from Oxfam to Amnesty International, the UN and Human Rights Watch. Every one of these organizations says that there has been a breach of international law."

How @GOVUK is arming and backing war crimes in Yemen by its ally Saudi Arabia, from @hrw, @CAATuk and @amnesty: https://t.co/e9pnqK4C6A

"In fact, a UN report earlier this year, found that there have been 120 different violations.

"The only people who say that British-made weapons have not been used in attacks on civilians in Yemen are the Saudi Air Force and the British government. The Saudi Air Force conducted their own review, and I think they can't possibly be trusted to impartially review their own conduct.

"What we have here is a toxic relationship with a brutal tyranny."

The Yemen civil war is a strategic battleground for the regional forces of Saudi Arabia and Iran. The crisis began in February 2015, when Zaidi Shia rebels known as Houthis, forced the beleaguered President, Abdrabbuh Mansour Hadi, to flee the capital Sanaa.

The situation quickly spiraled with Saudi Arabia assembling a coalition of nine Arab states, backed by the US and UK.

UK Government Claims Over Saudi Arms Use in Yemen 'Incomprehensible' - Oxfam
The Saudis have repeatedly labelled the Houthis as Iranian proxies, an accusation Tehran continues to vehemently denied. Nonetheless, both sides have been accused of gross human rights violations, including firing at civilian targets such as hospitals and schools indiscriminately.

The legal challenge into Britain's licensing of weapons sales to Saudi Arabia is due to go ahead before the end of February 2017.

Andrew Smith from the CAAT, which pressed for the review, said: "This is a historic decision and we welcome the fact that arms exports to Saudi Arabia will be given this level of scrutiny for the first time."