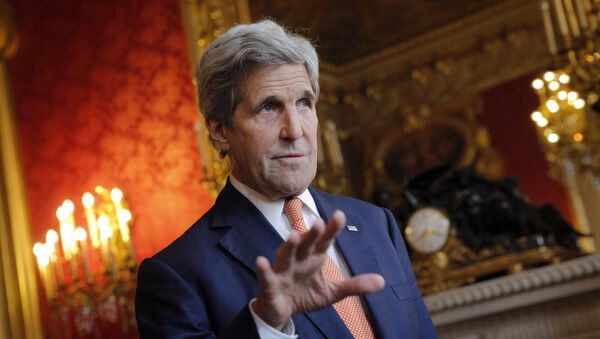 The US actions in Syria have all the earmarks of implementing the much-discussed "Plan B" voiced by US Secretary John Kerry in February 2016, Russian academic Stanislav Ivanov suggests, adding that Washington is seeking to divide Syria into a number of enclaves.

Washington is pushing ahead with its much-discussed "Plan B" in Syria seeking to divide the country into several enclaves with the leadership loyal to Washington and its allies, Stanislav Ivanov, a leading research fellow at the Institute of World Economy and International Relations (IMEMO) writes in his article for New Eastern Outlook.

"The essence of the American plan B for Syria is the distribution of its regions into enclaves and the consequent isolation of the central authorities. While Bashar Assad remains in power, Washington and its allies will be promoting separatist sentiments across Syria to sabotage any attempts to transfer the Syrian conflict into the peaceful reconciliation process," Ivanov suggests.

Turkey is 'Pulling US' Chestnuts Out of the Fire in Syria'
The Russian academic notes that Washington still relies on the Free Syrian Army, at the same time trying to engage in its fold as many smaller anti-government groups as possible, including Turkomans, the Muslim Brotherhood and all sorts of "moderate Islamists."

Ivanov highlights that Washington has apparently realized that its plan to overthrow Syrian President Bashar al-Assad failed. The academic expects that in the light of this, the US will now focus on eliminating radical Islamists in Raqqa in Mosul, at the same time trying to expand its control over Syria.

"At the beginning of 2016, Washington managed to bring together a so-called Democratic Alliance in the areas of Kobani, Al-Hasakah, Al-Qamishli that managed to recapture a number of town with the extensive amount of support from the US Air Force and Special Forces, along with taking the strategically important dam on the Euphrates River, which supplied electricity to the city and the province of Aleppo," Ivanov points out.

However, to accomplish its plan to defeat Daesh and other radical Islamist forces on the ground in Syria the US needs to strike a deal with Russia.

Bridging the Differences: What's Behind the Russia-US Talks on Syria
Experts believe that the talks on Syria between US Secretary of State John Kerry and Russian Foreign Minister may soon bear fruit. Still, the two countries have yet to reach compromise on what groups to consider "moderate" opposition in Syria.

Sergei Lavrov has repeatedly called upon Washington to separate "moderate" Syrian rebels from Islamists — most notably al-Nusra Front, which has recently changed its name to Jabhat Fatah al-Sham.

The Obama administration has failed to keep its promise given back in January 2016 to sort out the US-backed groups in Syria.

Instead, according to a copy of a letter from Washington's Syria envoy Michael Ratney, obtained by Reuters, Washington wants the Syrian government and Russia to "avoid bombing areas where more moderate insurgent groups are operating close to Jabhat Fatah al-Sham, previously the al Qaeda-affiliated al-Nusra Front."

Speaking to Russian online media outlet Vzglyad.ru, Viktor Murakhovsky, a retired Russian army colonel and editor of the Arsenal Otechestva (the Armory of the Fatherland) military magazine underscored that the issue remains the focus of the Russo-American negotiations.

"The key question is how to divide Assad's rivals into "moderate" opposition and radicals. [The sides need] to determine exact regions, positions which Russia can bomb and which it should not target. And, respectively, [it means] the delineation of areas of responsibility," Murakhovsky said, stressing that the Americans have been discussing this question for almost half a year.

The Russian academic suggests that the Turkish "Euphrates Shield" operation could be part of Kerry's "Plan B" and calls attention to the fact that Ankara and the Free Syrian Army (FSA) are now controlling a 60-mile long and 25-mile wide sector along the Turkish-Syrian border.

Indeed, Turkish President Recep Erdogan continues to promote the creation of a "no-fly zone" in northern Syria — along Turkey's southern border between Jarablus on the western bank of the Euphrates and Azaz.

According to the Turkish leader, the move could facilitate the solution of the refugee crisis.

At the same time, Erdogan is holding talks with Moscow over the ceasefire in the Syrian city of Aleppo, Daily Sabah reports citing the Turkish president.

"Now we are developing a cooperative for the Aleppo region. We are working towards establishing a cease-fire. We want the cease-fire to begin before Qurban Bayram [on Sept. 12]," Erdogan told a press conference at the G20 Summit in Hangzhou.

It still remains unclear whether or not Ankara will follow the US' Syrian plan.

Anton Mardasov of Svobodnaya Pressa called attention to the fact that by stepping in in Syria, Turkey has blocked the creation of the so-called Federation of Northern Syria-Rojava declared by the Syrian Kurdish Democratic Union Party (PYD) back in March 2016 and championed by the US-backed Kurdish People's Protection Units (YPG).

In this context Turkey's move has played into the hands of those forces which are trying to preserve Syria's territorial integrity. Mardasov highlighted that simultaneously Ankara has softened its stance on Assad remaining in a transitional Syrian government.

For his part, Jean Perier, an independent researcher and expert on Middle Eastern affairs suggested in his opinion piece for New Eastern Outlook that Turkey may bolster its cooperation on Syria with Russia, China and Iran while turning its back on Washington.