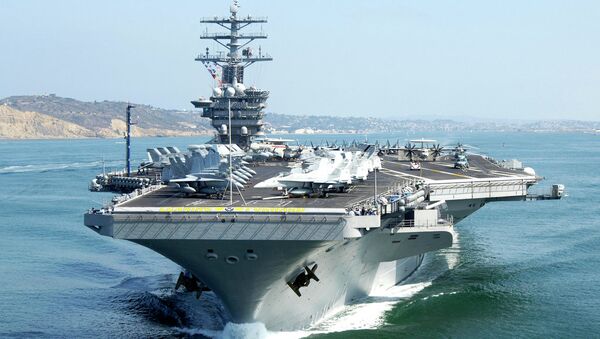 Recent naval advances by China and Russia have been heralded by defense experts who contest that America’s reign of dominance over the high seas may be coming to an end, but America’s Chief of Naval Operations thinks the US Navy remains unstoppable.

"This A2/AD, well, it’s certainly a goal for some of our competitor, but achieving that goal is much different and much more complicated," said Admiral Richardson. "I think there is this long-range precision-strike capability, but A2/AD is sort of an aspiration. In actual execution it’s much more difficult."

The statements come as military analysts increasingly believe that the advancements of China and Russia’s naval fleet provide America never before seen competition and challenge previous notions that the United States reigns supreme on the high seas.

The Admiral refused to get into specifics on how the Navy would protect its aircraft carriers cautioning that he didn’t want to give away any secrets to potential adversary nations.

"It’s really a suite of capability, but I actually think we’re talking too much in the open about some of the things we’re doing, so I want to be thoughtful about how we talk about things so we don’t give any of our competitors an advantage," said Admiral Richardson.

The chief naval officer’s discretion stands in stark contrast to China’s increasingly aggressive rhetoric about its maritime military power boasting about its indigenous "carrier killer" destroyer equipped with precision-guided missiles said to be capable of sinking a US aircraft carrier in a single show and boasting a range of 810 nautical miles compared to America’s longest-range missiles which have a strike radius of only 550 miles.

China has also revolutionized its intelligence, surveillance and reconnaissance capabilities (ISR) in recent years and installed high-tech radar systems on the disputed islands of the South China Sea in a bid to extend their naval reach several hundred miles further than ever which poses a major challenge for the United States Navy’s Pacific Fleet in the event that a conflict should break out.

Despite the growing challenge that both China and Russia face to the United States on the high seas at a time of nearly unprecedented regional tension, the Admiral remains confident that the US Navy can “inject a lot of friction into [their] system at every step of the way” in order to undermine competitors strike capabilities.