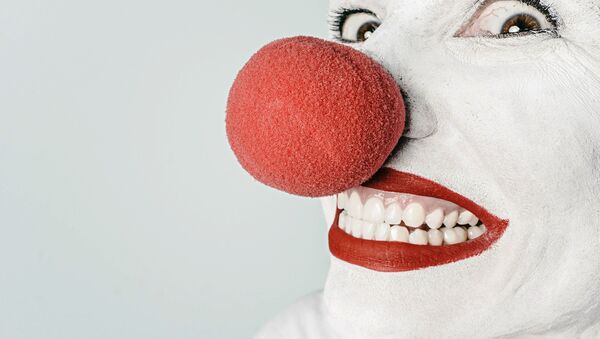 The Greenville police chief is warning residents that clowning around will not be tolerated, as four more sightings of creepy clowns, some of whom have reportedly attempted to lure kids into the woods, have been reported since Monday.

Oh Heck No! Clown Tries to Lure Kids Into South Carolina Woods
The South Carolina town has been gripped in fear after clowns attempting to entice children were reported by multiple residents. The first report came on August 21 and reports have been steadily rolling in ever since.

At a news conference on Thursday, Greenville Police Chief Ken Miller warned that anyone dressed up as a clown will be arrested.

"It's illegal. It's dangerous. It's inappropriate, and it's creating community concern so it needs to stop," Miller said, citing a law that bans anyone over the age of 16 from wearing a mask or concealing their identity in public, unless related to their employment. He also stated that he is unsure if the sightings have anything to do with the upcoming Rob Zombie film “31.”

The most recent sightings came on Wednesday evening.

In one report, officers responded to the Park Haywood Apartments after a woman reported a middle-aged white man wearing clown makeup and red hair standing outside a laundromat. She told the officers that the clown stared at her, but did not speak or attempt to follow her.

Another call came in to the Spartanburg Police Department on Wednesday from the Canaan Pointe Apartments, reporting that a clown was standing in someone’s backyard. The woman took a photo as it ran off, but the photo was too dark for the responding officer to see clearly.

The department also received two calls to another apartment complex on Thursday, but says that those may have been a hoax as they were sent to a building number that does not exist, and then a second call came from another location in the complex. People who were outside at the time did not see any clowns in the area.

"This is something that we're taking very seriously, especially because of the allegations of people dressed in clown outfits trying to lure children into the woods," Master Deputy Ryan Flood said on Thursday.

Are Creepy Clowns Really Trying to Lure Children Into South Carolina Woods?
While the officers have not obtained any photos or solid descriptions, the common thread among all reports is that they do not attempt to verbally communicate.

"They only stand in an area to be seen and watch the reaction of individuals," Miller explained.

The children who initially reported seeing the clowns told police that they “stay in a house located near a pond at the end of a man-made trail in the woods," according to the police report. When police searched the home in question, they found "no signs of suspicious activity or characters dressed in clown attire."

One woman, walking home in the evening last week, saw a clown with a blinking nose waving at her while standing under a street light by a dumpster. Another resident claimed that she saw clowns run away after her son told her that he saw clowns with green laser pointers. Other local children have claimed that a clown offered them money to follow them into the woods.

The spooky reports led police to issue a warning to residents of the Fleetwood Manor apartments, where the first sightings allegedly occurred.

"If there are sightings, take a photo, note person and vehicle descriptions, pay attention to direction of travel, and immediately call 911," police spokesman Gilberto Franco said.