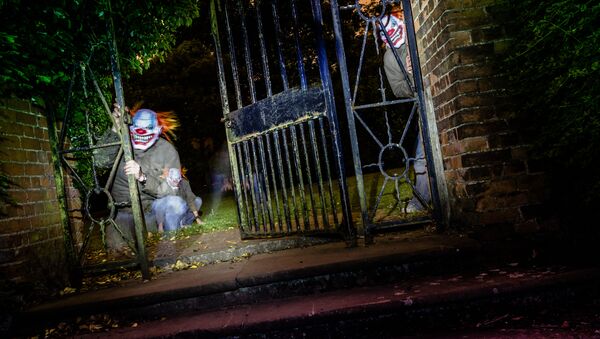 The town of Greensville, South Carolina, was gripped in fear after a clown was reportedly seen attempting to lure children into the woods near an apartment building, but police now say they have no idea if the reports are real or the product of an overactive imagination.

Oh Heck No! Clown Tries to Lure Kids Into South Carolina Woods
Residents, both children and adults, have claimed that "clowns stay in a house located near a pond at the end of a man-made trail in the woods," according to a police report. Police searched the home in question, but found "no signs of suspicious activity or characters dressed in clown attire."

One woman, walking home in late evening, saw a clown with a blinking nose waving at her while standing under a street light by a dumpster. Another resident claims that she saw clowns run away after her son told her that he saw clowns with green laser pointers. Other local children have claimed that a clown offered them money to follow them into the woods.

The spooky reports led police to issue a warning to residents of the Fleetwood Manor apartments, where the sightings allegedly occured.

A clown was first reported August 21 by a woman who claimed that her son spotted clowns at the edge of the woods. A responding officer found that other neighbors claimed to have seen the figures.

Reports have steadily rolled in, with another sighting called in from a different nearby apartment complex on Monday evening, as another juvenile reported to police that someone had been taking photographs of children in the neighborhood.

On Tuesday, Master Deputy Sheriff Ryan Flood announced that the department has yet to confirm any of the sightings, but that they have extra deputies on duty to patrol the area.