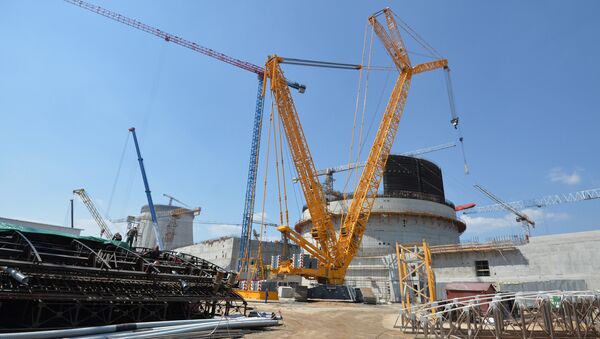 The construction of Belarus's Russian-designed nuclear power plant is proceeding as planned; the 2,400 MW plant is set to become the country's first nuclear power plant and to ensure Belarus's electrical energy independence. Meanwhile, in neighboring Lithuania, the project has been received with hostility and outright hysteria by local politicians.

Construction of the Belarusian NPP, the first power unit of which is expected to be commissioned in 2018, began in 2013, after Minsk concluded an agreement with Russia's Rosatom, and received a $10 billion Russian credit line for the plant's construction. The plant's second unit is expected to go online by 2020.

The plant, being built in the town of Astravyets in northwestern Belarus, is to be situated near the Belarusian-Lithuanian border, a fact which has left that Baltic nation's leaders hysterical, but not for the reason one might first think.

Last week, Lithuanian President Dalia Grybauskaite called the project an "existential" threat to European security. The plant, according to Grybauskaite, "presents a danger to the whole region, and for the residents of Belarus itself. The security of the Astravyets [plant] is a question of the EU's security. This is an existential question of our security."

Russia Unique in Being Able to Use Fast Breeder Reactors in Nuclear Industry
Hinting that physical security and environmental concerns aren't really the central issues on her mind, Grybauskaite noted in a separate interview that the Belarusian NPP "is one of the tools which could be use used in an unconventional method against the Baltic countries." Instead of clarifying what she meant, the president vowed instead to discuss the issue in meetings with Baltic leaders, and with US Vice President Joe Biden, who visited the region last Tuesday.

Vytautas Landsbergis, the veteran Lithuanian politician who became Lithuania's first head of state after the country declared its independence from the USSR, is no less hostile to the Belarusians' efforts, recently suggesting that the Belarusian NPP's construction amounts to "nuclear terrorism."

Emphasizing that the European Union "and perhaps even NATO" must reach "a clear and tough position" against the plant, the MEP also hinted the real reason for Vilnius's concerns, saying that the Belarusian project harms Lithuania's prospects for economic development.

What economic prospects is Landsbergis talking about? Well, it turns out that Lithuania has its own nuclear ambitions. In 2009, the country decommissioned the Ignalina NPP, left over from the Soviet era, which, incidentally, was also situated on the Lithuanian-Belarusian border. That plant's closure was a condition for the country's accession into the EU.

TEPCO’s Plan to Freeze Soil at Fukushima Site to Curb Contamination Failing
Since Ignalina's closure, Vilnius has been looking for investors for the creation a new plant (called the Visaginas NPP), to be built using non-Russian technology and contractors. That project has since been described as frozen, if not dead. In 2011, Vilnius reached an agreement with Japan's Hitachi corporation to be a strategic investor in the plant; a year later, the project failed to garner the necessary support in a non-binding referendum, and has been deemed economically non-viable.

Accordingly, as a commentary in Russia's Vzglyad online newspaper recently explained, Vilnius officials' hysterical commentary about safety and environmental concerns, along with their threats to bring Brussels and even NATO into the debate about the Belarusian NPP's construction, really appears to be a cover for their own failed NPP venture.

The reality, as Belarusian officials, including President Alexander Lukashenko have repeatedly noted, is that once the Belarusian NPP is up and running, it will be able to provide electricity to countries in the region, including Lithuania, which went from electrical self-sufficiency to dependency following the closure of the Ignalina plant.

Meanwhile, neither the International Atomic Energy Agency, nor the UN agency charged with observing trans-border environmental impact assessments, have supported Lithuania's claims. Accordingly, independent journalist Evgeny Radugin suggested that this combination of factors has to driven Lithuanian leaders into a panic.

Earlier this month, the country's foreign minister, Linas Linkevicius, warned that Belarus "would not have the required trust, and should not hope for the sale of electricity from their unsafe nuclear power plant," presumably to Lithuania.

Commenting on Lithuanian officials' remarks in an article for PolitRussia, Radugin noted that having failed to stop the Belarusian project via environmental and safety concerns, "Vilnius's main goal" has become "to close Belarus's access to global energy markets."

Rising Accident Rate in Ukraine's Nuclear Sector Worries Ex-Chernobyl Director
"However, the realization of this goal is problematic," the journalist noted. "The [Belarusian] NPP will obviously go into operation before Visaginas." Russia has even offered Minsk the option of bringing the plant online earlier than planned.

What's more, Radugin noted, the Lithuanian plant, if it's ever built, will not be able to compete with the Belarusian plant's prices for electricity. The Russian plant being built in Belarus features Generation 'Three Plus' power units. "Such stations are already operating around the world and have proven to be rliable and cost-effective."

Accordingly, the journalist noted, "Lithuania only has one chance: to get Brussels to work against Minsk for political reasons. Then there would be a chance to make the Belarusian NPP unprofitable. However, as things stand at present, "Europe does not have the slightest concern about the division of the poor and tiny Baltic energy market."

For this reason, Vilnius is attempting to act independently, introducing draft laws meant to prohibit Lithuania from purchasing Belarusian electricity, or allowing its transit through Lithuanian territory. Unfortunately, Radugin noted, having been outmaneuvered by Minsk and Moscow, all that's left for Lithuanian officials is "to engage in hysterics toward Russia and its partners."