US Violates Security Treaty With Japan 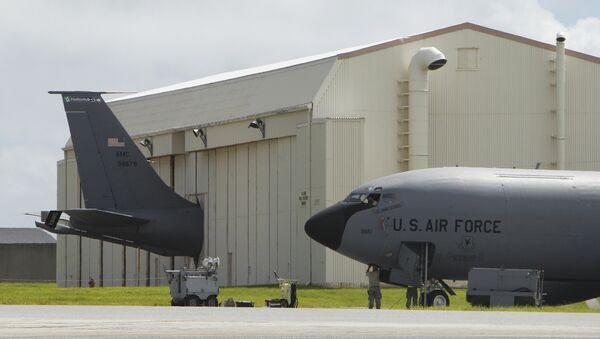 © AP Photo / Greg Baker
Subscribe
International
India
Africa
The UK Ministry of Defence has disclosed that the United States has been training British troops on its military bases in Okinawa, in violation of the Japan-US Status of Forces Agreement.

Asia
Japan Advocates Disarmament Yet Unwilling to Abandon US 'Nuclear Umbrella'
According to the Royal Navy Command Headquarters in Portsmouth, England, two Royal Marine lieutenants were embedded with American counterparts and deployed to US Marine Corps Camp Schwab and USMC Camp Hansen in January 2015, where they conducted jungle and range training.

The deployment violates a Japan-US security agreement signed in 1960. The treaty committed America to assist in the defense of Japan if it came under military attack, and Tokyo, for its part, provided bases and ports for US armed forces. The treaty does not allow the training of third-country forces at US bases in Japan.

Angry comments from officials in Okinawa were not long in coming.

"If everybody starts freely using [US bases], there'll be no stopping it. Whether the Japanese government tacitly gave permission or did not know about it, it's a big problem," a prefecture spokesperson said.

Asia
Japan’s First Lady Attends Protest Against US Military Base in Okinawa
Meanwhile, Okinawan elected officials, who have recently been in sharp dispute with Tokyo about the US military presence on their island, offered that training foreign forces in Okinawa is not prohibited under the treaty, and would be decided depending on a case-by-case basis. The Japanese government is reportedly in the process of confirming the circumstances of the deployment with the British government.

Non-American troops in Japan, unlike US service personnel stationed in the country, are not covered by the Japan-US Status of Forces Agreement (SOFA), which facilitates standard immigration procedures and gives the military primary right of jurisdiction in case of a breach of law while on duty.

"It seems UK troops in Japan are operating here without legal status. There could be serious ramifications if they were involved in an accident or incident," said Manabu Sato, a professor of political science at Okinawa International University.

In June, thousands of demonstrators gathered in the Okinawan prefectural capital of Naha to protest the heavy US military presence in the region. A history of violent crimes by American personnel against Japanese citizens on the island has angered residents for decades, including the murder of a local woman in April by a former marine.