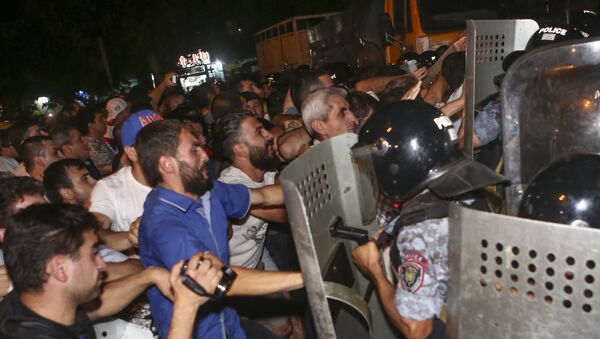 The press secretary of Armenia’s Ministry of Health said that the number of people hospitalized after the dispersion of protesters near a captured police building in the country’s capital has gone up to 60.

Police Begin to Disperse Demonstrators Near Seized Building in Yerevan
YEREVAN (Sputnik) – The number of people hospitalized after the dispersion of protesters near a captured police building in the country’s capital has gone up to 60, press secretary of Armenia’s Ministry of Health, Anahit Aytayan, said.

"Sixty people were hospitalized as a result of the police dispersion of demonstrations held around the territory of the patrol police building captured by an armed group in Yerevan," Aytayan said as quoted by Sputnik Armenia on Saturday.

On July 17, an armed group took several police officers hostage at the traffic police station in the Erebuni district of Yerevan. During the attack a policeman was killed and six more people were injured, including five police officers. Since then the group has released hostages, but captured ambulance staff, who came to the station to assist the wounded.

On July 20, the group's supporters clashed with police. Following the clashes, 51 people, including 29 policemen were injured, while police detained 136 people.

On Friday, police started dispersing protesters near the captured police building in Yerevan. The protesters supporting the armed group that had seized the police building had reportedly marched across the city to the Horenaci street cordoned off by police forces.

Police officers used flashbangs against the protesters and started detaining people near the Horenaci street, later forcing the demonstrators to retreat to the Saritagh neighbourhood.

The armed group continues to occupy the seized police building demanding the release of Jirair Sefilian, an opposition politician and founder of the New Armenia Public Salvation Front.