Paper Tiger: Why Turkish Army is Not as Strong as It Seems 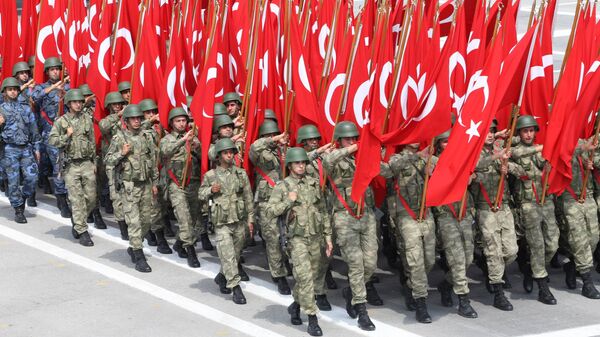 While the Turkish Army is known as the second largest force in NATO, Russian political analyst Evgeni Krutikov suggests that it resembles nothing so much as a "paper tiger." The analyst notes that in the wake of the attempted military coup the country's army could be considerably weakened.

Although Turkey's army is the second largest force in NATO with its 750,000-strong military contingent, it is not as powerful as it seems, Russian journalist and political analyst Evgeni Krutikov notes.

"The attempted coup [in Turkey], the war in Syria, the Karabakh turmoil and the Russian Su-24 tragedy have attracted a lot of interest to the Turkish army. This army is looking very impressive, but only at first sight: it has had more problems and failure than success," Krutikov writes in his article for online newspaper Vzglyad.

How Turkey's Mighty Military Turned Into a Shadow of Its Former Self
The political analyst has called attention to the fact that the Turkish army was formed "chaotically," depending much on economic and political conditions.

Krutikov underscores that for a long period of time Ankara has regarded Greece as Turkey's major rival, regardless of the fact that both Turkey and Greece are NATO member states.

Given this, it is hardly surprising that a major part of Turkey's military force is concentrated on the country's western border. Whatever happens in Syria and Turkey's Kurdish regions, the traditional balance of forces remains intact, according to the journalist.

Taking a walk down the memory lane, Krutikov insists that during the Cold War the Turkish army had not boasted any major military success except its invasion of the island country of Cyprus in 1974.

Still, the Turkish army defeated the Cyrpriots mostly because of numerical superiority, according to the journalist. In general, there were a lot of flaws in Turkey's military operation: for instance, a maritime battle near Paphos where the Turkish air force attacked its own navy.

Interestingly enough, the Turkish Army underwent significant changes in the 1990s under Tansu Ciller, Turkey's first and only prime minister to date.

Birds of a Feather: What Made Gulen Erdogan's Archenemy
Ciller re-equipped and transformed the Turkish Army into a modern fighting force capable of dealing with domestic challenges, including those posed by the PKK (Kurdistan Workers' Party). It is worth mentioning that it was Ciller who persuaded Washington to designate the PKK as a foreign terrorist organization.

At the same time, Tansu Ciller turned a blind eye to the emergence of radical nationalist parties in Turkey, most notably Grey Wolves, and had no scruples about using them as a tool in Turkey's confrontation with the Kurds and Armenians.

Despite the modernization initiated by Ciller there were still gaps in the Turkish Army's defense capabilities in the early 2000s. However, although then Prime Minister Recep Tayyip Erdogan pledged to strengthen the nation's armed forces and equip the army with modern weapons, his vows often turned out to be a hot air. 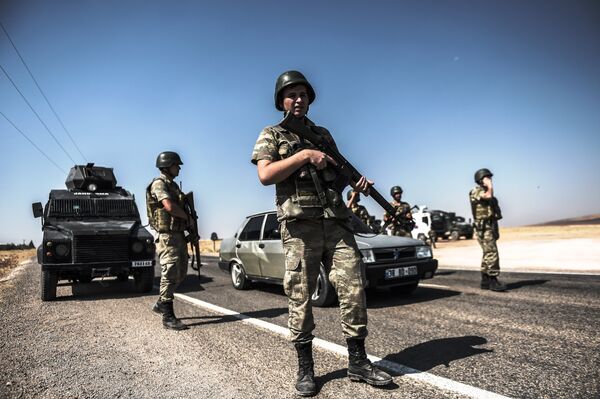 Back in 2012 Turkey's liberal newspaper Taraf shed light on problems haunting the Turkish military force in its article entitled "Turkey's Army is Mighty In Numbers, Not Weapons."

While the Turkish army comprises more than 700,000 personnel, about 470,000 of its members are not career soldiers, Taraf explained, as quoted by Al-Monitor.

The media outlet revealed that Turkey spends "most of its budget on personnel expenses" of about 40,000 officers, 100,000 non-commissioned officers, 65,000 gendarme/army specialist soldiers, 8,000 reserve officers and 470,000 soldiers doing their compulsory military service. Furthermore, the army also employs 50,000 civilian workers, it stated.

Washington Has 'No Plan' to Move Warplanes Out of Incirlik Base in Turkey
As a result, "the army is trying to make up for its technology deficit with unlimited manpower," the media outlet noted, adding that "basing Turkey's defense concept on the human element instead of technology creates weaknesses in intelligence, reconnaissance and surveillance."

Echoing Taraf, Krutikov highlights that the Turkish navy, air and ground forces need serious modernization. Most of the weapons obtained from NATO are obsolete and can be used only in limited local conflicts.

In addition, the country's air defense is dependent on NATO and the US' military installations in Turkey.

Moreover, there are also problems in coordination between the country's uniformed services.

Meanwhile, the failed military coup in Turkey is likely to add insult to injury with thousands of career military servicemen detained.

On Monday Turkish Prime Minister Binali Yildirim announced of restructuring within the Armed Forces in the wake of the attempted coup.

"First of all, there is a serious need for restructuring in [public] institutions, especially the [Turkish] Armed Forces [TSK]. There is a security gap, as we have seen during the coup attempt. There are problems in [the] hierarchy between lower level and senior level [officials.] We will restructure [the army] in a manner that will resolve these problems," Yildirim said, as cited by Hurriyet Daily News.

"Structures which produce revolutions should no longer have a place within the [Turkish] Armed Forces. We need to stop it from becoming a threat… There will be such changes that they will not even dare to make an attempt," the Prime Minister stressed.

It seems that the Turkish Army could be considerably weakened due to the ongoing purge and new changes announced Yildirim.