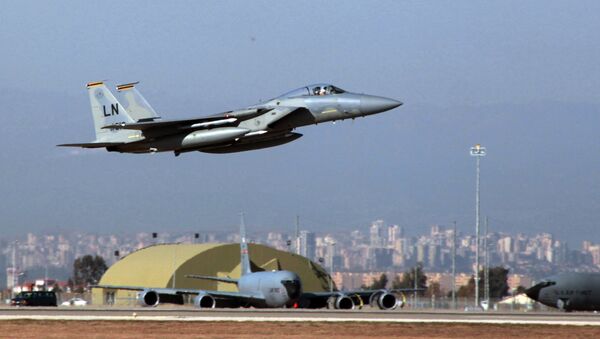 Washington has no plans to relocate its warplanes from the Turkish Incirlik airbase despite the recent coup attempt, the US Air Force secretary said.

WASHINGTON (Sputnik) — The United States does not plan to move its airmen or other personnel off the Incirlik air base in Turkey, despite tensions following the recent military coup attempt in that country, US Air Force Secretary Deborah James said on Tuesday.

"There is no plan to move out of Incirlik whatsoever," James stated at a forum hosted by Defense One.

On Monday, James discussed the situation at Incirlik with the US commander at the base. She noted that US officials are closely monitoring the situation, "but for now… the operations, the missions are ongoing."

On July 15, a faction in the Turkish military attempted a coup against the government of Recep Tayyip Erdogan. Following the unsuccessful coup, US operations at Incirlik were temporarily halted and the power supply to the base was cut.

Turkish Police Raid Incirlik Airbase Where US-Led Coalition Jets Are Based
Some Turkish politicians suggested the United States had been involved in the coup attempt and raised the possibility of cutting off US access to the Incirlik air base.

Despite the apparent tensions in the US-Turkish relationship, James said relations between the two countries’ military personnel on the base is "professional," and there have been "no problems with our people."

The United States was granted access to the Incirlik air base in July 2015, which serves as the staging area for the majority of US airstrikes carried out against the Daesh terrorist group.