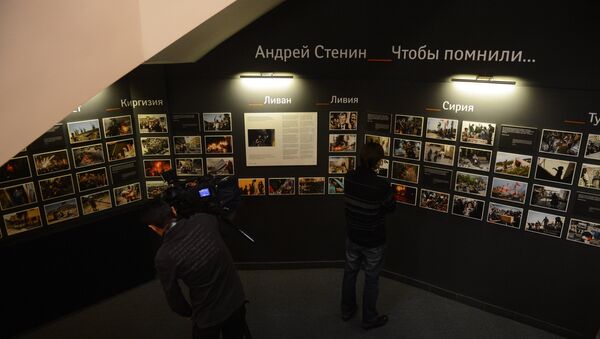 The Andrei Stenin International Press Photo Contest, run by Rossiya Segodnya International Information Agency in partnership with the Russian Federation Commission for UNESCO, on Wednesday announced the results of the online voting for the best entry.

MOSCOW (Sputnik) — Internet users voted for the best photograph or photo series on the website stenincontest.ru between May 30 and July 20.

"The Knights" by Egypt's Gehad Hamdy won by gaining the highest number of votes. Hamdy will receive a certificate in recognition for winning the competition.

Andrei Stenin Contest Draws Talented Photographers From Five Continents
All the winning entries will be displayed at the Museum of Moscow between August 30 and September 11.

The exhibition of the Stenin Photo Contest winners at the Museum of Moscow will include over 200 works by photographers from Russia, China, Hungary, Lithuania, Spain, Italy, Egypt, Bangladesh, India, Palestine, Syria, Slovakia, and Slovenia.

The best young photojournalists aged 18-to-33 will also display their work depicting cities and provinces, politicians and athletes, as well as heroes and ordinary people as part of the exhibit. The Museum of Moscow will serve as the first exhibition venue for the winning works which will later be displayed across Russia and internationally.

First Exhibition of Winning Entries in Stenin Photo Contest Opens in Moscow
The Andrei Stenin International Press Photo Contest aims to promote young photographers and raise public awareness of photojournalism and its purpose. It is Russia’s only platform purposely aimed at discovering new photojournalists and supporting and encouraging high standards of documentary photography in Russia and the around world.

This year the contest had a record-breaking international reach, featuring photographers from 71 countries and from all five continents competing for the right to call themselves the best in the world.

The contest’s professional information partners are: Russia's Academy of Photography, the agency Geophoto.ru, the photography educational website photo-study.ru, the Moscow Union of Journalists, the Union of Student and Youth Media, the portal Young Journalists and the Uglich Photo Parade festival.