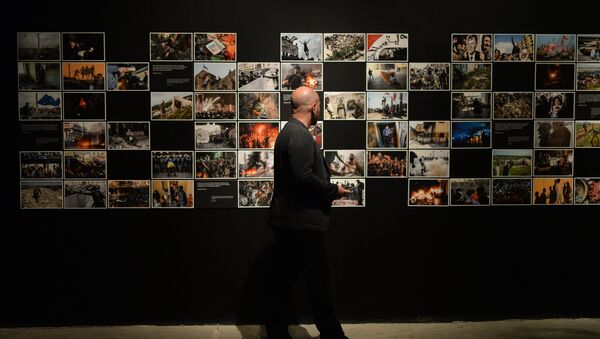 © Sputnik / Vladimir Astapkovich
/
Go to the photo bank
Subscribe
Over 200 works by young photographers from various countries that were placed in the Andrei Stenin International Press Photo Contest – 2015, have gone on display in the first exhibition recently opened by Rossiya Segodnya at the Museum of Moscow.

MOSCOW (Sputnik) — The exhibition entitled “…So That You Know” includes works by the world’s best young photojournalists who are talented, daring and provocative at times.

Visitors will be able to see sketches about life in large cities and small towns, religious and ethnic celebrations, political reporting, sports victories and everyday life through the eyes of those who sit at the forefront of international photojournalism.

“…So That You Know” is a phrase that photojournalist Andrei Stenin, who died while reporting from Ukraine in August 2014, liked to use. He believed that it captured the essence of photojournalism – conveying the truth to people through photographs.

The exhibition at the Museum of Moscow also includes the photos taken by Andrei Stenin in Ukraine, Lebanon, Syria, Egypt, Turkey, Libya and Kyrgyzstan between 2010 and 2014.

Rossiya Segodnya Releases Collection of Andrei Stenin's Best Works
These works, supplemented by comments from Stenin’s diaries and his posts on social media, make up a photo chronicle of conflict zones around the world.

Rossiya Segodnya Director General Dmitry Kiselev said at the exhibition’s opening ceremony on September 1 that, “This exhibition of the prizewinning entries of the Andrei Stenin Photo Contest, the main goal of which is to support young photographers and to introduce new names to the public, is deeply significant. ‘…So That You Know’ is also an opportunity to continue Andrei’s professional vision through the work of young photojournalists.”

“…So That You Know” will run at the Museum of Moscow at 2 Zubovsky Boulevard through September 13.

For more information about the competition winners and their photos, check out here.

Rossiya Segodnya established the Andrei Stenin International Press Photo Contest on December 22, 2014, to commemorate Andrei Stenin, its photojournalist who died in the line of duty in southeastern Ukraine on August 6, 2014. The contest is aimed at promoting photography, raising awareness about the purpose and challenges of photojournalism, and supporting young photographers.

About 5,000 entries from 54 countries, including Russia, Europe, North and South America, Africa, the Middle East, India and Southeast Asia, were contributed for the first contest.  The jury of leading Russian and foreign photo and art figures was headed by Jason Eskenazi, a renowned US photographer and Guggenheim Fellowship laureate. Those who selected the winners, included internationally renowned masters, among them Natalya Udartseva (Russia), the founder and director of the Visual Arts School; Andrei Polikanov (Russia), Visual Director of Takie Dela/So It Goes online media, Nuzhna Pomosch (Help Needed) Charity Foundation; Attila Durak (Turkey), co-founder and curator of the FotoIstanbul festival; Grigory Dukor (Russia), chief photographer, CIS, Reuters Limited Moscow Representative, and others.