Brexit Blow to Massive EU-US Trade Deal, UK Major Importer From the US 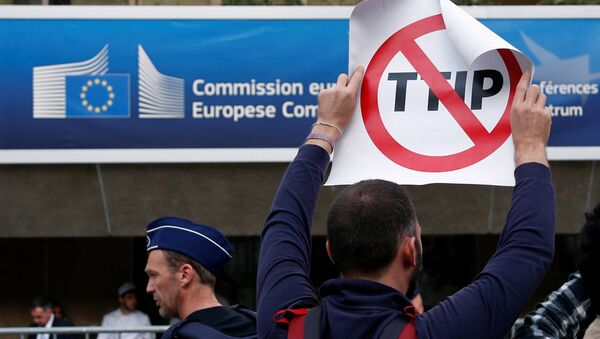 © REUTERS / Francois Lenoir
Subscribe
The controversial Transatlantic Trade and Investment Partnership (TTIP) to create the biggest trade union in the world between the US and the EU has been thrown into chaos following the Brexit referendum, because of Britain's importance to US exports.

The UK is the United States' most important export market in the EU, in terms of services — including financial, pension, telecommunication, computer and government services. The UK takes 25 percent of US exports to the EU, which makes it a huge trade partner with the US. The US and the UK are each other's largest foreign investors. This investment supports approximately one million jobs in each country.

'#TTIP Lite' is not enough, says the EU Chief Negotiator.

Campaigners Call for End to 'Failed Corporate Coup' TTIP After Brexit
The fact that Britain is set to leave the EU — which was negotiating the trade deal with the US on behalf of all its members — has thrown the talks into chaos. Without the UK as part of the deal, the entire framework will have to be reassessed.

The talks have already faltered over the services sector — which is particularly important to both the UK and the US. Chief US trade negotiator Dan Mullaney told reporters that the EU was being particularly slow at reaching agreement of US access to the EU services sector.

He said: "Given the importance of this sector to both of our economies, progress here has been noticeably and painfully slow."

The fact that the UK is set to leave the EU leaves a significant hole in the TTIP deal. As Mullaney put it:

"Imagine if the United States said, for instance, 'Well, maybe TTIP will not apply to California?' "

The TTIP would create the biggest trading zone in the world opening up the EU and US markets to each other. However, the talks have been mired in controversy because of their secretive nature, disagreements over regulatory issues — food safety and genetic modification in particular — and the contentious Investor-State Dispute Settlement (ISDS) mechanism.

Time to hit the stop button on #TTIP. Our comment at the end of the 14th negotiation round: https://t.co/DHnP7VQCkU pic.twitter.com/X5aWiYPhi7

​One of the major stumbling blocks has been over the detail of regulatory difference between the US and the EU. A common trade agreement requires commonality of regulatory issues. None is more important than food and farming — affecting what people put in their mouths.

Food regulations in the EU and the US are different, with the EU being less open to genetic modification that the US. In order to have a trade agreement, the two sides need to agree on a common regulatory framework.

​In the event of a US firm not being allowed to sell is products — such as beef and pork treated with growth hormones, chicken washed in chlorine, fruit and vegetables treated with endocrine-disrupting pesticides and genetically engineered and modified foods, as are all currently allowed in the US — in the EU, the firm could sue the EU or member states.