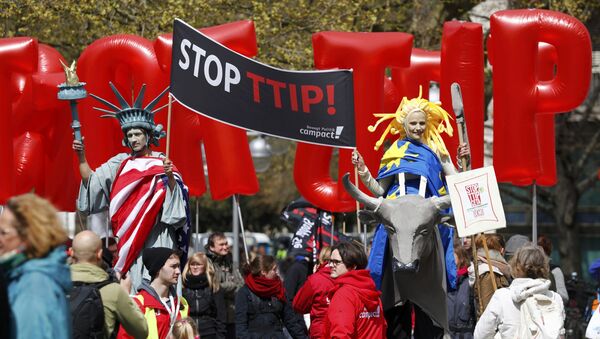 © REUTERS / Kai Pfaffenbach
Subscribe
Campaign group Global Justice Now has told Sputnik that, since the result of the British referendum on its EU membership, precipitating Brexit, the controversial Transatlantic Trade and Investment Partnership (TTIP) talks should be halted.

The latest round of negotiations to create the biggest trade deal in the world between the European Union and the United States began Monday (July 11) for the first time since the UK signaled it would be leaving the EU, with Brexit top of the agenda.

"The TTIP negotiations were already on pretty shaky ground before the EU referendum, and now the shockwaves of Brexit are threatening to derail the deal entirely. With senior political figures from France and Italy signaling that the deal is dead in the water, surely Celia Malmström [European Trade Commissioner] should call time on this failed corporate coup," Nick Dearden, the director of Global Justice Now told Sputnik.

"The toxic trade deals being pushed by Brussels would only benefit tiny financial elites, while the ordinary people of the EU would be stripped of legal protections of labor rights, consumer standards and public services. If the EU is going to prevent further disintegration after Brexit, it needs to stop prioritizing corporate power grabs and start addressing issues such as rising inequality and social exclusion," Dearden told Sputnik.

Now that the UK has signaled it will leave the EU, the talks will focus on the remaining 27 member states and the UK would be excluded from the controversial deal.

The TTIP would create the biggest trading zone in the world, opening up the EU and US markets to each other. However, the talks have been mired in controversy because of their secretive nature, disagreements over regulatory issues — food safety and genetic modification in particular — and the contentious Investor-State Dispute Settlement (ISDS) mechanism.

One of the major stumbling blocks has been over the detail of regulatory difference between the US and the EU. A common trade agreement requires commonality of regulatory issues. None is more important than food and farming — affecting what people put in their mouths.

Food regulations in the EU and the US are different, with the EU being less open to genetic modification that the US. In order to have a trade agreement, the two sides need to agree on a common regulatory framework.

​In the event of a US firm not being allowed to sell is products — such as beef and pork treated with growth hormones, chicken washed in chlorine, fruit and vegetables treated with endocrine-disrupting pesticides and genetically engineered and modified foods, as are all currently allowed in the US — in the EU, the firm could sue the EU or member state.

000000
Popular comments
Stopping TTIP without stopping CETA is useless.
kooka
11 July 2016, 19:56 GMT2
000000
kooka, Kill then all! We don't NEED a huge "trading bloc" we just need to be fair in trade with each other. If humanity has to sign a binding contract to do that, then we have much bigger problems to worry about.