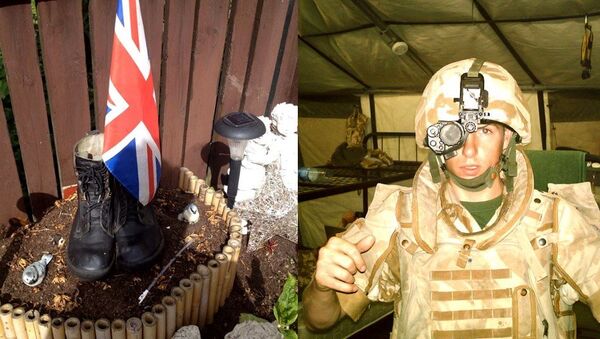 On the day a report into the Iraq War chaired by Sir John Chilcot is published, the mother of an 18-year-old soldier, killed in Iraq in 2007, told Sputnik she expects "more lies."

"I thought when Sir John Chilcot came on board, that's it, we'll finally get some answers and I will be able to put the demons and my son's death to bed," Janice Procter told Sputnik.

Janice Procter's son, Michael Tench, was one of the youngest British soldiers to die in Iraq in 2007 when he was aged just 18. Procter, who has been inundated with journalists ahead of the findings of the Iraq inquiry, told Sputnik the delay to the report has prolonged her pain.

"We're still grieving families at the end of the day, and the delay to this report has prolonged the pain that we face on a daily basis.

"The only way I'm going to get closure on my son's death is for justice to be sought.

"I understand that the Chilcot Inquiry is not a court of law — but I do think he owes the 179 lives some justice," Janice told Sputnik.

How many pages does it take to tell us that the nation & our brave troops were lied to? Blair didn't care then or now! #Chilcot #justice

Pulling no punches when asked who she blames for her son's death, Janice names the then Prime Minister, Tony Blair.

"I blame Tony Blair for my son's death. Tony Blair sent them in, Tony Blair made the agreements, and he sent our kids to the slaughter."

"If Tony Blair's children were sent to the front line — like our children, would he have to fight the same fight as us and wait as long as this for a report? I don't think so.

"Why is there one rule for us — and one rule for him? What makes him above the law? Blair owes our children an answer and as parents — we deserve honesty."

Seven years and millions of pounds later, Sir John Chilcot, who led the Iraq Inquiry, has finally delivered his 2.6 million word report in answer to the question: why did the UK go to war in Iraq in 2003?

Joking aside it is extraordinary that journalists have been given just three hours to read a 2.6m word report #Chilcot

However the publication of the report has been met with apprehension from families who lost their loved ones during the invasion of Iraq and who have been fighting for the truth for the past seven years, like Janice Proctor.

"I'm proud of my son for wearing his uniform and fighting for Queen and country but this report will not bring my son back — it won't bring the other 178 lives back either," Procter told Sputnik.

"He wanted to wear that uniform and stand proud, he wanted to do his job, but in a legal war, not an illegal one.

"If the war was legal, you could accept that they died for Queen and country, they died a hero's death, but so many areas are not legal, the claims of weapons of mass destruction, the lack of equipment. What we're left with is no one answering questions and no one giving the truth," Procter said.

The Inquiry was established by former Prime Minister Gordon Brown in June 2009 to examine the events in the run-up to the US-led invasion of Iraq in 2003 — and the aftermath.

.#Chilcot Inquiry established with wide terms of ref by #Labour gov under #GordonBrown to hide not reveal the truth #Iraq /

"All I want is someone, just someone to come down to our level, someone who has a heart and doesn't hide behind a title and say yes, it was an illegal war and you will get justice," Procter told Sputnik.

"I would ask Chilcot, why? Why has it taken so long? I'm absolutely appalled. They thought we'd go away and shut up — they didn't expect us to fight on and to stand up for justice," Janice Procter says, with exasperated defiance.

"It's not about me. This is our fight for our children. Their voices will never be heard — but they'll be heard through us."