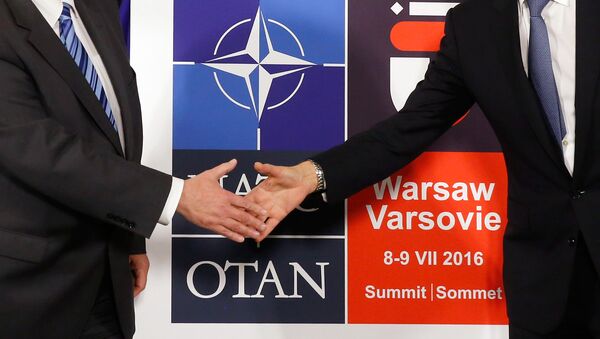 Against the background of deteriorating relations with Russia and the UK's vote to leave the EU, NATO's upcoming summit will become "a crucial test of the coherence of the western alliance," according to the Financial Times newspaper.

The Price of Neutrality: Serbia Caught in Between EU-NATO and Russia
With Britain indicating its intent to withdraw from the EU and the West-Russia ties deteriorating, NATO's forthcoming summit is expected "to send a message of unity and strength of the western alliance," the Financial Times newspaper reported.

The summit is due to be held at the National Stadium in Warsaw between July 8 and 9.

During the gathering, NATO is expected to formally approve the deployment of four battalions in Poland, Lithuania, Latvia and Estonia. Discussing ways to deter alleged Russian aggression will also be high on the agenda.

In this regard, the Financial Times referred to Russia's "tough" reaction to NATO's increasing military presence in the Baltics, citing the deployment of "nuclear-capable missiles, tanks and fresh troops" in the Russian exclave of Kaliningrad.

"As a result, the Warsaw meeting and its aftermath will pose a serious test of the nerve of the western alliance," the Financial Times pointed out, also citing the West's concerns that "the Brexit vote reflects an increasingly inward-looking mood among UK voters.

Additionally, the newspaper drew attention to the fact that many of the key Western leaders who will meet in Warsaw are due to resign in the near future, including David Cameron and Barack Obama.

"Against this backdrop of political and strategic uncertainty, it is crucial that the NATO summit demonstrates the unity, coherence and confidence of the west," according to the Financial Times.

Meanwhile, security analyst Alexei Fesenko has insisted that NATO will use the Warsaw summit in order to try, either openly or covertly, to void key clauses of the 1997 NATO-Russia Founding Act.

"The most important thing that will happen at NATO's summit in Warsaw is the political game over the 1997 NATO-Russia Founding Act," he noted.

Hacked Emails Reveal NATO Pushed Obama Administration to be Tough on Russia
He recalled that under this document, the bloc reaffirmed that it does not intend to deploy large fighting forces and tactical nuclear weapons on the territory of its new member states.

Russia's envoy to NATO Alexander Grushko, for his part, said that Moscow does not expect that NATO will make any new decisions on reinforcing the alliance's military presence in Europe at the upcoming summit in Warsaw.

"As a matter of fact, all of the plans have been already announced. Let's wait for the Warsaw [summit]. Honestly, I do not think that any qualitatively different decisions will be made," Grushko told reporters.

Alexei Melnik, of the Razumkov Center think tank in Ukraine, believes that as far as Russia is concerned, the Warsaw summit is expected to deal with the two key areas of NATO's strategy towards Russia, namely, "deterrence" and "dialogue," according to the Ukrainian news website Segodnya.ua.

If one thought that what happens at upcoming @NATO summit in Warsaw didn't matter much, post- #Brexit think again.

Melnik expressed hope that despite the alliance's drive to deter Russia, efforts will be made to support bilateral dialogue which Melnik said helps save the current level of mutual trust and prevent the growing confrontation, including as a result of unforeseen military incidents.

"I would like to emphasize that NATO's upcoming summit in Warsaw will be an extraordinary event. The summit's decisions will have long-term implications for regional and global security," he said.

He was echoed by the nonprofit organization the Nuclear Threat Initiative (NTI) which said that NATO should prevent conflict escalation with Russia while making decisions at the upcoming Warsaw summit.

"The alliance must seek to avoid escalating tensions and drifting toward a new confrontation with Russia when taking steps at the Warsaw summit to strengthen NATO’s deterrence and defense posture and reassure allies," the NTI said in a report.

In the meantime, NATO Secretary General Jens Stoltenberg has signaled readiness to hold a NATO-Russia Council meeting "shortly after" the Warsaw summit, according to the Voice of America.

No More Maidans: NATO Training Ukrainian Troops to Crush Future Protests
The news website quoted Stoltenberg as saying that "transparency and risk reduction should be an important topic" at the NATO-Russia Council gathering, and that NATO continues to be "a responsible, transparent and predictable actor" and remains "open to dialogue with Russia.

NATO has been reinforcing its military presence in Europe, particularly in Eastern European states, since the outbreak of the Ukrainian crisis, citing Russia's alleged interference in that conflict as justification for the move.