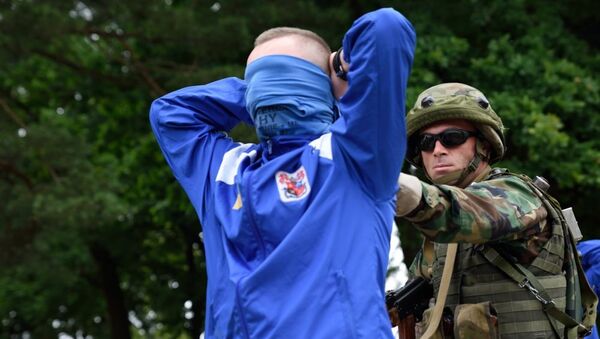 © Photo : Sgt. 1st Class Whitney Hughes
Subscribe
International
India
Africa
Rapid Trident-2016, a series of military drills involving Ukrainian and NATO troops in the western Ukrainian region of Lviv, kicked off on June 27. This year, the exercises, involving over nearly 2,000 troops from 13 countries, apparently include training the Ukrainian military on how to prevent popular unrest from toppling the government.

Officially, Kiev and NATO have kept tight-lipped about the content of the training scenarios, which in previous years has included maneuvers involving armored vehicles and army aviation, along with small arms fire training. However, photos by US Army Europe, and by Ukrainian political scientist Oleh Havich seem to clearly show that this year, training includes instructions on how to suppress unruly street demonstrators.

One of the photos in Havich's shared Facebook post features men in t-shirts and sweat pants gathered around an armored personnel carrier; another shows them simulating resistance to the APC, and throwing plastic water bottles at it. Finally, protesters in a makeshift shelter are shown being patted down against a wall. The photo for the US Army, meanwhile, shows a 'simulated detainee' with a blindfold on being taken to a checkpoint at an 'Enhanced Maneuver Training lane' during the exercise.

Commenting on the photos of the training exercise, Havich recalled that "in 2014, when the Berkut in Kiev dispersed the heroes of the Maidan, civilized Western countries insisted that the government was going against its own people, that Ukraine was a dictatorship, and that the use of force was a bloody crime against the people. However, after the change of power, the use of force against peaceful protesters appears to be a normal act by the authorities. Moreover, Western experts are beginning to instruct the Ukrainian military in this craft. I cannot call this anything but hypocrisy in relation to the Ukrainian people. And if western Ukrainians believe that they will not be touched if things go off, they are deeply mistaken."

Ukraine Gets American Radars, Hopes for ‘Enhanced Cooperation’ With US
For her part, Anna Sedova, a journalist for Russia's Svobodnaya Pressa online newspaper, wrote that the photos make it patently obvious "that authorities in Kiev and their Western partners are preparing for the potential suppression of popular uprisings not only in the Donbass, but also in other regions of Ukraine."

"Moreover," she added, "it's entirely possible that they will be forced to deal not only with the 'separatists', but also with nationalists, who served as the main driving force behind the previous Maidan. For example, on June 2, Radical Party lawmaker Ihor Mosiychuk wrote that fighters from the Aidar and Donbass battalions had flocked to the Pechersk District Court of Kiev, where the detained ex-chief of Aidar staff had been brought [for trial]."

At the time, Sedova recalled, Mosiychuk warned that "this could be the beginning of a new national revolution;" other radical nationalist leadership have been making similar statements since shortly after the February 2014 Maidan coup d'état which brought the country's current leaders to power.

"Only now," the journalist added, "it seems that the Kiev authorities, contrary to the Yanukovych regime, have received a mandate to disperse 'peaceful protesters'. The US military is even ready to give them hints about how to do it better."

World
Ukraine’s PM Calls for More NATO Action to Limit 'Russian Aggression'
Speaking to Svobodnaya Pressa, Alexander Gushin, deputy head of the Post-Soviet Studies department at the Russian State University for the Humanities, emphasized that "the danger of a new Maidan certainly exists."

"This does not mean that it will take place in the near future. But given political trends and the social situation in the country, mass protests in some regions, especially in the east, are likely. The authorities have decided to hedge their bets for such a scenario, and are using US military resources to do so."

According to the political scientist, "protest potential exists in the country's southeastern regions, including Kharkiv and Odessa. But it also exists in regions facing ethnic and territorial issues – in Transcarpattia, for example. Furthermore, social protest is not always based on political issues. Therefore, discontent could break out in other regions, including in central Ukraine. But it appears to me that we cannot yet talk about a powerful and large-scale protest movement in Ukraine at the moment."

Asked to comment on the apparent double standards in Western politicians' attitudes toward the pre- and post-Maidan governments' response to putting down mass protests, Gushin emphasized that "that's politics — there's no sense talking about any kind of morality. The fact that [one position] was favorable to the West then has nothing to do with what they need now. Therefore, any talk about what happened on the Maidan has little significance. Naturally, now they will behave quite differently, and they will not have any qualms in doing so."