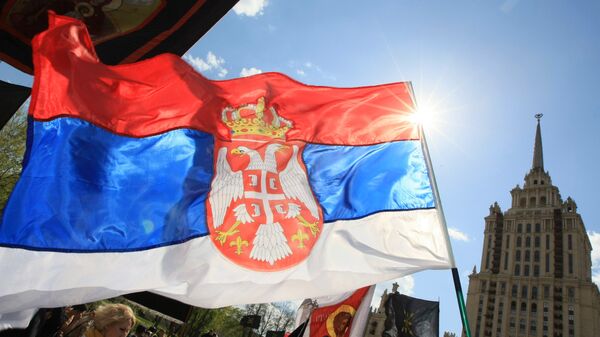 In a “West vs Russia” world, Serbia is trying its best to keep a perfect balance between the EU and NATO on the one hand – and with Russia on the other. But how high the price of neutrality is in the eyes of Europe?

Serbia Lists 'Development of Close Ties With Russia' Among Top Priorities
Serbia is connected to Russia in a number of ways, both cultural and economic. Serbia is an Orthodox Christian country, as well as Russia, and it even housed the Russian Orthodox Church in Exile,  created in 1921, sometime after the October Revolution and creation of USSR. Before that, the Russian Empire repeatedly provided military assistance for Serbia. After Serbia became a part of Yugoslavia, it kept close ties with the Soviet Union.

Russia is on fourth place for Serbian export and on the third for Serbian import. Serbia's national oil company Naftna Industrija Srbije (NIS) is majority-owned by Russia's Gazprom, which is also the largest supplier of fossil fuels in Serbia.

Serbia is now an official EU member candidate and a participant of NATO's Partnership for Peace programme. On top of that, Serbia signed the highest-tier cooperation possible between NATO and a country not willing to join the alliance, called Individual Partnership Action Plan.

However, this declared neutrality costs Serbia dearly. Serbian cooperation with Russia is met with displeasure in the West. For example, when Russia announced its intention to arm Serbia with sophisticated weaponry, including the S-300 anti-air missiles, it caused major controversy in Brussels, which is remarkable, as the EU is not a military union, at least so far.

Yugoslavia Revisited: US Hardliners Want to Bomb Syria Like It's 1999
Despite its aspirations to join the EU, Serbia refused to join the EU sanctions against Russia, a decision declared openly by Serbian President Tomislav Nikolic. This decision was followed by EU Commissioner for European Neighbourhood Policy & Enlargement Negotiations Johannes Hahn's statement that Serbia must join the sanctions if it is really interested in joining the Union. Some argued that this statement was effectively a demand to sell Russia in favor of EU membership.

"It's obvious that the European Union is increasing pressure on Belgrade with an aim to force Serbia to coordinate its foreign policy with Brussels and join the EU sanctions against Russia. That would have been a great mistake and would have contradicted Serbia's national interests and the will of its people," said Nenad Popovich, the head of the Serb People's Party (SPP) in October 2015.

This view is shared by the country's President Tomislav Nikolic, who said in his interview for Rossiya 24 TV Channel that "the EU, of course, seeks to make us join their cause, but we won't submit. We want to cooperate with both Europe and Russia, and when we face conditions, we start having second thoughts about the good will [of our partners]."

Apparently, the EU membership, much desired by Premier Vucic and the Serbian business elite, becomes a bounty for abandoning Russia. Instead of a productive development with benefits from both sides and despite talks about respect of Serbia's neutrality, the EU consistently forces Serbia to make its final choice, which, undoubtedly, will be disastrous for Serbian economy, as it will force the country to rip too many ties, both in business and culture.