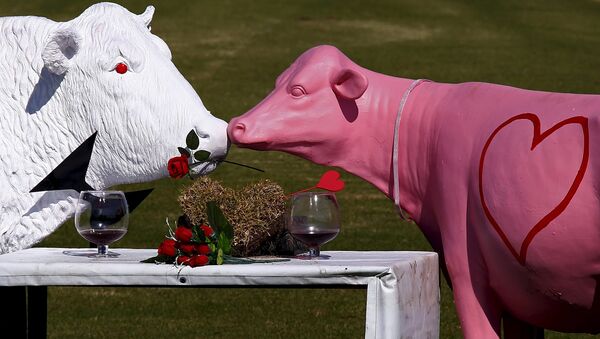 © REUTERS / David Gray
Subscribe
International
India
Africa
Contrary to widespread belief, Hindus don’t worship cows. They respect, honor and adore the animal, who gives more than she takes. Indeed, cows give us milk, curds and butter, taking nothing but water, grass and grain in return. Here are some fascinating facts about cows in India dug up by Japanese-language news blog Rocket News 24.

First off, cows can tie the knot!

In 2011, a family in Guradia, India married their cow. After finding a mate they thought was worth their beloved animal’s attention, they outfitted the heifer with flowers and a gold-trimmed red blanket.

The groom, a black bull, wore a red hat and a beautiful blanket. The couple was then paraded through the street inside an open trailer looking very smug.

In 2013, a man in India made up his mind to marry a cow and even videotaped the whole ceremony where the fiancée wore a simple flower garland and a blanket.

The bridegroom who had secured prior agreement to wed an animal by his grandmother, apparently opted for a bovine spouse after failing to find the right woman to marry.

Would you kill me?

Killing a cow in India is a crime, which carries a prison term of up to five years. Exporting  cows for the purpose of slaughter is also a crime.

An estimated 2 million cows are annually smuggled into neighboring Bangladesh each year and about 1,000 cow smugglers have been killed by Indian border guards during the past decade alone. So why put your life on the line when you can simply cuddle these adorable animals?

Cow urine is widely used in Indian Ayurvedic medicine and drinking it is believed to purify the body, slow down aging, destroy harmful cells, repair damaged DNA and even cure cancer. And it is a potent antibiotic too!

Cow dung is widely used in India as fertilizer and as a source of bio-gas energy for households. No wonder that cow dung festivals are so popular there.

Bovine crap is called “gobar,” which has prompted some to say India has a “gobar economy.”

India has recently appointed Otaram Devasi as the country’s first “Minister of Cows” in a bid to protect the sacred animals.

With the country’s once 100-strong herd of indigenous cows now down to just 36 and the Indian Desi breed almost extinct, one can only wish the Minister of Cows luck in preserving this holy animal.