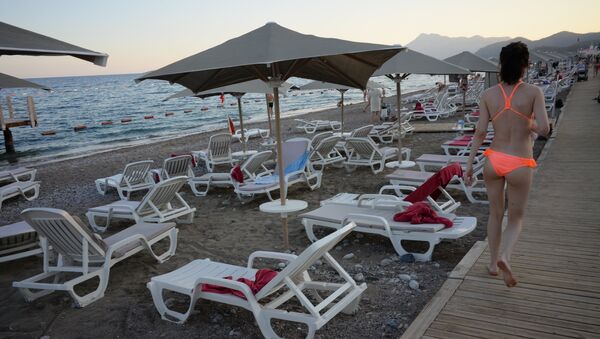 © Sputnik / Vladimir Vyatkin
/
Go to the mediabank
Subscribe
International
India
Africa
Following the Turkish President’s apologetic letter and phone call to Vladimir Putin, the process of restoring cooperation with Turkey was ordered by the Russian President, including in the spheres of tourism, trade and economic ties. Sputnik spoke with Turkish tourism representatives who expressed hope for the restoration of relations in tourism.

Summertime Sadness: Turkey's Tourism Crisis Shows No Sign of Abating
Chairman of the Federation of Turkish owners of TÜROFED hotels, Osman Ayık, said, “A very important positive step for the normalization of relations has been made. Russia and Turkey are two countries, which have long had close relations; in addition, both countries are important players in the region. Therefore, maintaining warm, neighborly contact is an important element for maintaining peace in the region and the world at large.”

He further said that tourism had always had a very important, positive impact on relations between the two countries. He expressed hope that in the near future the long-waiting will have positive results and “people of our countries will again be able to freely visit each other's homes and vacation, as it was in years past,” Ayik said.

The chairman added that if the warming of relations continues, Turkey will be able to receive Russian tourists this summer. The prospect of this process is completely dependent on further developments in the relations of the two countries and on how quickly and efficiently the normalization process will take place.

“Of course for the remainder of the year we will not be able to achieve the high levels that had been recorded in 2014. But this is only the beginning; the main thing is that it was marked by an important positive development in this direction,” Ayik said.

He further said that he expects tourism the sector to see an improvement in general. “We are confident that Russian tourists want to regain the freedom to visit our resorts. We expect that the negative trends caused by the crisis between the two countries will be overcome in the foreseeable future.”

Ali Kızıldağ the Head of the POYD Hotel Managers Association also shared his views with Sputnik. He said that the improvement of relations between Russia and Turkey is not only a positive thing for the tourism sector but for all the ‘reasonable’ citizens of both the countries.

“The crisis that started in the relations between our countries as a result of this tragic incident, led to a depressing situation, which neither side deserves in all spheres, economic, social or cultural.”

He further said that for the improvement of relations his organization which is a public organization did everything possible by meeting with representatives of various organizations. “We met with our guests at every opportunity, saying that we are not enemies, but friends,” Kızıldağ said.

Industry experts have stated that based on expectations, the number of Russian tourists visiting Turkey this year amounts to zero.

However, the head said that as soon as the bureaucratic difficulties between the two countries are overcome they will start sending airplanes from all regions of Russia to Turkey. The same applies to other commercial and economic activities.

World
Damned If You Don't: Erdogan's Chance to Save Turkey's Tourism Industry
Hüseyin Baraner, President of the European-Turkish tourist board spoke to Sputnik expressing delight at the prospect of improved relations between Turkey and Russia.

“I am very pleased with this step. After all, Russian people are not only our customers, not only our reliable trade partners, but also our neighbors, with whom we have long maintained a close friendship. In our relations there can be ups and downs, it is inevitable,” the president said.

He further said that they are ready to receive Russian tourists to their resorts even this summer.

“We need only a small signal from Moscow; in Turkey we are ready to meet our Russian guests. None of the Russian flags were removed from the Turkish hotels; we expect and hope to see them soon. Personally, I'm very positive about the situation with regard to prospects for the normalization of Turkish-Russian relations. The Turkish people will do everything that they can. For our part we are ready to take all the necessary steps to contribute to the normalization of relations,” Baraner concluded.

Russian tourism to Turkey in May 2016 was down 91.82 percent year-on-year, according to figures released by Turkey’s Culture and Tourism Ministry, the RBC newspaper reported Tuesday.

In November 2015, Russian authorities banned the sale of package tours to Turkey and stopped all flights between the two countries, while also introducing a range of economic sanctions.

Ankara tried to patch-up Russian-Turkish relations this week with a personal letter from President Erdogan to Russian President Vladimir Putin. The letter apologized for shooting down the Russian jet in November 2015 and offered “deepest condolences” to the pilot’s family, the Kremlin reported Monday.