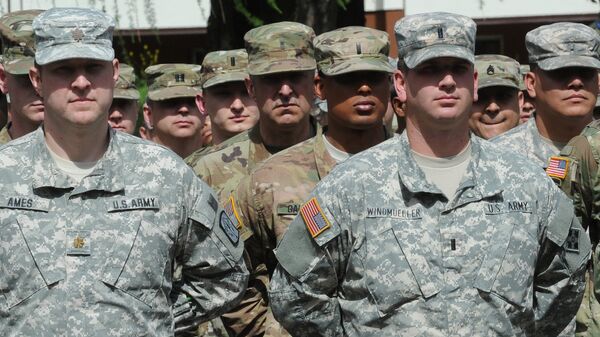 © AFP 2023 / Alik Keplicz
Subscribe
International
India
Africa
NATO has kicked off its Anaconda-2016 war game accumulating the largest assembly of foreign forces since WWII on Russia's doorstep. But is it Russia, who poses an imminent threat to the West? It seems that Moscow's only fault is that 'it put Russia too close to NATO's military bases.'

NATO has begun its largest war game since the end of the Cold War-era in Poland, involving 31,000 troops from 24 countries. The United States has provided 14,000 soldiers for Anaconda-2016 this year.

The move is aimed at demonstrating NATO's military might and readiness to Moscow.

However, there is hardly any sense in it. Does anyone really believe that Russia pose a threat to the US or Europe?

"It looks like NATO is aiming for yet another Guinness World Record besides 'longest occupation of Afghanistan in modern history'; it already enjoys all the honors and privileges that come with this distinction. [This time,]NATO will make history in a different, almost equally useless way," American journalist Riley Waggaman writes for the Huffington Post, commenting on the NATO war game on Russia's doorstep.

Mocking NATO's "Russia-threat" narrative, the journalist asks: "Why did Russia put its country so close to our [NATO] military bases and peaceful international war games, anyway?"

All About Money: Now is the Best Time for France, Germany to Leave NATO
Waggaman remarks that while the Anaconda drills "sound like a real hoot," there is yet another fun exercise everyone should try: to find out who is the world's largest defense spender.

"Is the Russian buildup a danger to the security of the NATO countries and to [the] US?  The US pays a disproportionate amount for NATO arrangements in money and manpower.  The US spends $600 billion on defense while Russia spends $84 billion; the US has 19 aircraft carriers to Russia's one," Curtis notes.

Here's US military spending vs. the entire rest of the world https://t.co/osdq9o3XXW pic.twitter.com/q823X3Frul

​Indeed, according to the Peter G. Peterson Foundation, US spends more on defense than China, Saudi Arabia, Russia, the UK, India, France and Japan combined.

'It's Time to Leave NATO Now!' Europeans Launch New Anti-War Campaign
However, an imminent threat to the American security from some "bogeyman," even a fictional one, will allow the US hawks and their sponsors from the seemingly omnipotent US military industrial complex to spend even more.

On the other hand, a "bogeyman" is absolutely necessary to justify the existence on the NATO bloc. Indeed, NATO's raison d'etre had vanished with the collapse of the USSR and disintegration of the Warsaw Pact.

"Without cynicism, it can be argued that NATO needs a bogeyman version of Russia as a major threat [in order] to survive as an organization," Curtis underscores. 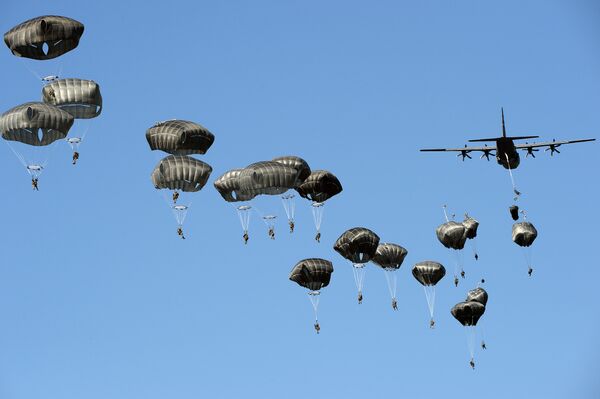 US troops land with parachutes at the military compound near Torun, central Poland, on June 7, 2016, as part of the NATO Anaconda-16 military exercise.
© AFP 2023 / JANEK SKARZYNSKI

Surprisingly, the real menace to Western civilization, international terrorism, seems beyond the scope of US war planners and NATO officials.

NATO does not really address it because it lacks the ability to do so, for several reasons.

"Some commentators have questioned the value of NATO's role in intelligence-gathering on terrorism. NATO has no law enforcement role and cannot replace Europol as a counter terrorism center," Curtis explains.

"This is the role that NATO should be playing in cooperation with Russia. The present policy of NATO is based on the false premise that Russia is a threat.  It should accept that the real threat is Islamist terrorism, and the two sides must cooperate on this," the journalist stresses.