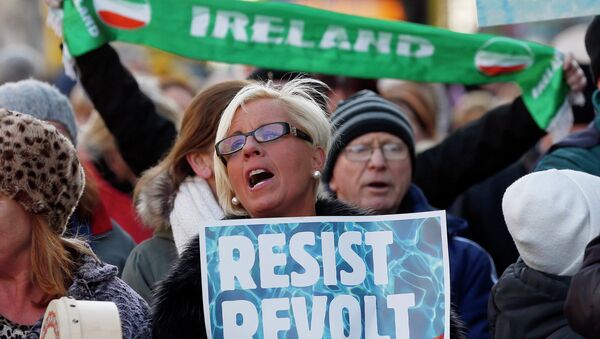 © REUTERS / Cathal McNaughton
Subscribe
Ireland is the latest of several European countries to give legitimacy to the Boycott, Divestment, and Sanctions (BDS) movement against Israel’s treatment of Palestinians.

“While the Government does not itself support such a policy, it is a legitimate political viewpoint,” said Charles Flanagan, the Minister for Foreign Affairs and Trade of the small island nation, in parliament on Thursday.

“I do not agree with attempts to demonise those who advocate this policy or to equate them with violent terrorists. I am not aware of any credible allegation that the individual in question has had any involvement in violence,” he continued.

Ireland Expects Deal on Greek Funds at Eurozone Finance Ministers Meeting
The person he was referring to is Omar Barghouti, a founding member of the Palestinian Campaign for the Academic and Cultural Boycott of Israel (PACBI) and the BDS movement.

Earlier this month Barghouti, who is a permanent resident of Israel, was denied a travel document, which he needs to go in and out of the country. His residency rights are also being questioned despite the fact that he has lived in the country peacefully for 22 years and is married to an Israeli citizen.

“I am deeply concerned about wider attempts to pressure NGOs and human rights defenders through legislation and other means to hinder their important work. We have raised this both at EU level and directly with the Israeli authorities,” said Flanagan.

It is widely believed that Barghouti is experiencing travel and residency difficulties because of his work advocating for BDS.

According to The Electronic Intifada, “Ireland is the third EU government to make such a statement in recent months.”

The Netherlands and Sweden have made similar such comments.

Israel is currently leading a campaign to pressure foreign governments around the world to make laws that make it difficult for their citizens to support the BDS movement.