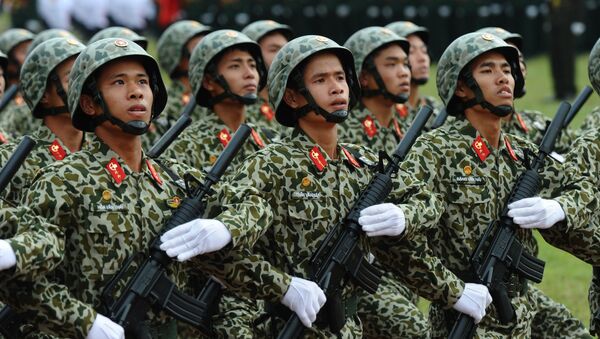 In an effort to counter China’s growing influence on the world stage, the US may soon open up arms deals with a former enemy. But the move could come at a price.

During his last year in office, President Barack Obama showed an interest in settling a number of America’s old rivalries. The Iran nuclear deal and opening of diplomatic relations with Cuba both point to the White House’s desire to bury the hatchet.

At the same time, however, tensions have increased with Washington’s chief adversary in the Pacific, China. President Obama’s effort to stymie Beijing’s growing influence may lead to another historic reversal: the opening of arms trade with Vietnam.

The US placed a moratorium on selling weapons to Vietnam in 1975, but Hanoi has frequently urged Washington to reconsider. Now, citing Beijing’s actions in the South China Sea, Vietnam may finally get its wish.

"Vietnam believes that this element of barrier of the past should be removed to reflect our full normalization of relations started two decades ago, and the current level of our comprehensive partnership," Vietnamese ambassador to the US Pham Quang Vinh said, at the Vietnam War Summit in Texas earlier this month.

According to McClatchy, US lawmakers say Obama could take action before the end of his term in December.

"This is one of the last vestiges of a bygone era," Joseph Liow, a senior fellow at the Center for East Asian Policy at the Brookings Institution, told McClatchy. "The symbolism is more important than the shopping list."

The US is not hiding its true intentions with the decision.

"I believe that Chinese behavior warrants us assisting them [Vietnam] in obtaining the ability to defend their rights as a nation," Arizona Senator John McCain said, according to McClatchy. McCain chairs the Senate Armed Services Committee, which recently approved the language for such an agreement.

But there are alternative motives to the prospective deal. While Vietnam has not provided a specific shopping list, it would likely be interested in the same equipment currently being used by the Pentagon in the South China Sea, including surveillance aircraft like the P-3 Orion and C-130 Hercules.

China Claims 'Series of Tricks' by US Led to Port Snub

Both of these planes are built by US defense giant Lockheed Martin. The P-8 Poseidon, developed by Boeing, is another possibility.

If Vietnam buys from the United States, it will be less likely to buy from current suppliers, including Russia, who currently supply the country with Kilo-class submarines and Sukhoi fighter aircraft.

With a single executive action, President Obama may settle a decades-old feud, and inadvertently deepen hostilities with current rivals.