Nigeria Vows to Look Into Detention Deaths... Just Like It Did Last Year 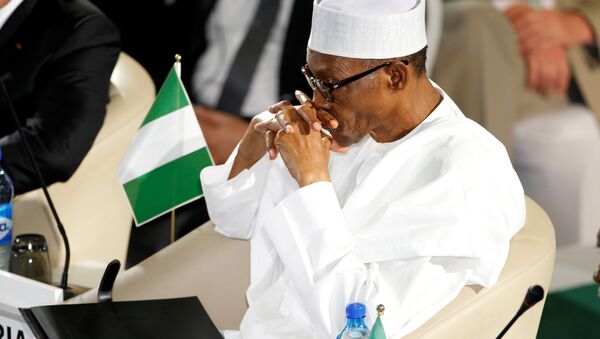 Africa
Nigeria Baby Deaths: 'Alarm's Been Sounded, Nothing's Been Done' - Amnesty
President Buhari has said he will investigate the notorious Giwa detention Barracks in Nigeria, but this is a claim he has made before and still the abuse and killings continue.

The statement from the President came shortly after Sputnik reported on 11 May 2016, the Amnesty international investigation into Giwa Barracks which was published on the 10 May 2016, titled, 'If you see it, you will cry: Life and death in Giwa barracks.'

Amnesty's report into Giwa Barracks documented the horrific conditions of the detention center in Nigeria, where children and babies face death on a daily basis.

In an interview with senior researcher and investigator, Daniel Eyre, Sputnik was told that despite the constant calls to shut the center down, their protests have gone unheard.

President Buhari has finally responded to the investigation, stating that he will step up his plan to investigate the abuse at the detention centre in Maiduguri, Nigeria, where in the last year alone, 149 people have died — out of them 11 were children under the age of six, including four babies.

Babies dying in Giwa barracks #Nigeria@camanpour: “So will you step up investigations?”
Buhari:“We have to do it" pic.twitter.com/twmFCts9H8

Asked in a recent interview whether he will "step up the investigation" into conditions in Giwa barracks, President Buhari said:

However, this is not the first time the president has said he will investigate the claims of violence at the center. In 2015, Amnesty reported the abuse and the Nigerian government also said they would investigate.

"The government of Nigeria has zero tolerance of the mistreatment of citizens, especially when human rights are involved."

However so far, nothing has happened and the abuse continues.

Amnesty has reminded the president again, not to delay and to act with haste if the abuse at the barracks is to cease.

"Amnesty International has repeatedly called on the Nigerian Government to investigate allegations of war crimes, but after almost a year in office President Buhari has yet to show any sign that he plans to pay anything more than lip service to these allegations. The perpetrators are still at large. If the President is serious about his promises, now is the time to take action. It is Nigeria's responsibility to investigate. However, if the government shows itself to be unwilling or unable to investigate, the ICC must step in," Amnesty International's senior research adviser Aster van Kregten said.

In addition to this, a statement from Amnesty reads, "Amnesty International is calling on President Buhari to waste no more time before launching an urgent investigation into deaths in detention and to shut down Giwa barracks detention center without delay."

"It's almost a year after President Buhari promised he would investigate Amnesty International's evidence of death in custody and extrajudicial executions. President Buhari should not waste more time. Now is the time to put those promises into action and launch an urgent investigation into these deaths, release the children and shut down Giwa barracks detention facility without delay," Aster van Kregten added.

Gina barracks have responded to Amnesty's investigation, stating that they did give the NGO access to the center and that the reports of abuse are false.

However, Amnesty claim this is simply not true. They based all of there findings on the interviews given by previous detainees and eyewitnesses, which was also supported by videos and photos showing that many of the detainees had died from hunger and dehydration.

"Amnesty International remains extremely keen to visit Giwa barracks and would very much welcome an invitation granting our researchers permission to do so."

#Nigeria: 11 children have died under detention in #Giwa barracks. It's time to #ShutGiwaNow https://t.co/G75mkxKqvn pic.twitter.com/Ey2WzzBSFr

"No response has been received… In the last years, the military has repeatedly released statements denying Amnesty International's findings. It seems almost a standard response. It is extremely worrying that nothing is done to actually address our findings. How many more babies and children have to die?"

It is not just Nigeria who must act, Amnesty had a warning to the international community, who have also turned a blind eye to the suffering. "Nigeria's international partners also need to consider the consequences of their military support. Many nations, including the UK and the USA, provide arms, training and advice to the Nigerian military. Any state which provides such assistance must carry out due diligence to ensure that it does not run an overriding risk of facilitating serious violations of international human rights or humanitarian law. The international community must not overlook these responsibilities," said Aster Van Krontan.