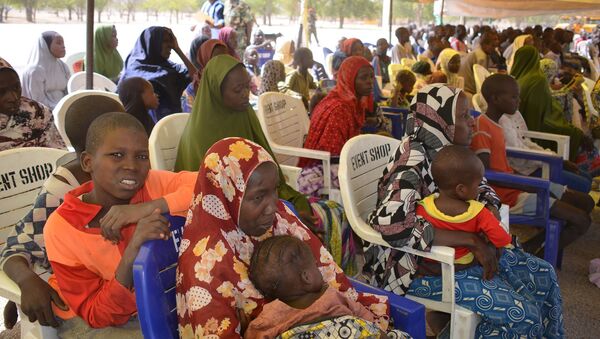 © AP Photo / Jossy Ola
Subscribe
International
India
Africa
Amnesty International has released a report documenting the horrific conditions of the Giwa barracks detention center in Nigeria, where children and babies face death on a daily basis. Constant calls to shut the center have gone unheard. However, with the release of this latest investigation, the government could be forced to act immediately.

On the eve of the anti-corruption summit, hosted by David Cameron, countries will meet to discuss corruption. The Nigerian President Buhari, will also be in attendance. If anti-corruption is the key subject, then the release of a powerful Amnesty International report, looking at abuse within a Nigerian detention center, run by the president's own military, should certainly be a topic for discussion.

How many more babies have to die in military detention in Nigeria? https://t.co/r1ixgpifop #ShutGiwaNow pic.twitter.com/m6joS4kKWV

Giwa barracks detention center in Maiduguri, Nigeria, is notorious and within the last year alone, 149 people have died following their detention — out of them 11 were children under the age of six, including four babies.

Research gathered by the Amnesty team has come from four previous detainees and eyewitnesses, which is also supported by videos and photos and shows that many of the detainees have died from hunger and dehydration.

Perhaps the Army would like to allow independent monitors in to the barracks to verify conditions? @LudovicaIaccino @IBTimesUK

In an interview with Amnesty, researcher Daniel Eyre, has revealed not only the horrific conditions but also how regular calls for the detention center to close have been ignored.

"It's hard to say that's a question for the current government, when there was the change in government last year and new military appointment, there was the belief that they would not repeat the same mistakes of the previous administration as they met the minimum standards. Sadly that has not been the case, the number of people who have been detained in the barracks has increased, and we see overcrowding leading to a lack of food and water and horrible conditions have been documented," Eyre told Sputnik.

Mr Eyre reveals that the reason for detention is down to something as simple as people fleeing their villages after the area they live in becomes affected by Boko Haram. After they flee the military conduct mass arrests, there are no court cases where people can contest their detention.

"A lot of people have told us there were mass arbitrary arrests as people fled from their villages and went to government controlled areas pretty much all of the young men were arrested on mass.

"So hundreds of people at a time, imagine if you are doing that over the size of the state, the numbers will very quickly add up, so that's one of the reasons why we think there is such overcrowding," Eyre said.

"Then the second problem, once people are detained they are never brought before a court and never charged with a criminal offence and they don't have access to lawyers so they cannot detest the legality of their detention. Unless the military decides to release them they are stuck," Eyre told Sputnik.

There is also a risk that many of the detainees could be innocent, especially those under the age of 12, who are too young to bear any responsibility for crimes.

"These people are never brought to court, so there's no opportunity to review whatever evidence has been brought against them.

The very worrying information that we have of the techniques that they have to arrest people, suggested that these arrests are arbitrary; that they are not based on reasonable suspicion of people committing an offense. That particularly applies when you are talking about children, who are so young that they are too young to bear responsibility for crimes. I mean below the age of 12 you can't hold someone criminally accountable for what they have done.

"So clearly, detention is not right for these people and they should be released or handed over to child protection authorities."

Daniel describes the heartbreaking account of one girl, who at the time of her detention was 13-years-old. The young girl describes the military beat her legs and arms at Giwa Barracks with the fan belt from a car. This is just one account of the terror these people are subjected to on a daily basis.

For Amnesty, the next step is to gain momentum and attention from the Nigeria Government. A country now committed, alongside the UK to anti-corruption practices. This information on corruption within their detention center should surely create some kind of action.

"Well the first step is to get this information out there, we had previously a positive response from President Buhari last year, when we launched our comprehensive report on military violations, and he promised that there would be investigations and action taken. Now we haven't seen any action so far to date, but so far this year, this is the first serious allegation that we are making against the military under his command, so we are hoping that he will live up to his promises, take action and put an end to these deaths and investigate those responsible."