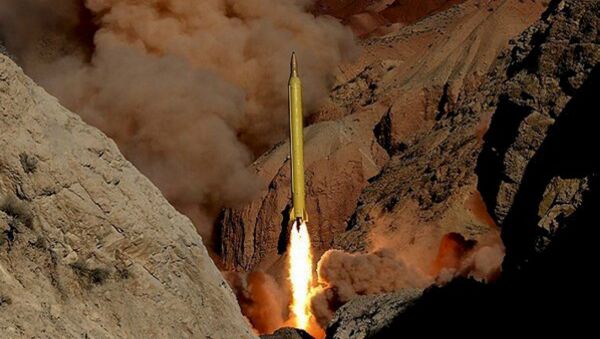 "We test-fired a missile with a range of 2,000 kilometers (1250 miles) and a margin of error of eight meters," Brigadier General Ali Abdollahi declared at a Tehran science conference. The eight-meter margin indicates that the "missile enjoys zero error," he told conference participants.

US officials allege that the ballistic missile test is inconsistent with a July 2015 UN Security Council resolution, although missile tests were not expressly forbidden under the UN brokered nuclear deal signed last year with the Iranian government.

The resolution states that "Iran is called upon not to undertake any activity related to ballistic missiles designed to be capable of delivering nuclear weapons, including launches using such ballistic missile technology," until October 2023.

Notwithstanding the UN Security Council position, Iran has carried out multiple ballistic missile tests since the nuclear deal was adopted on October 18, 2015. In November, Iran launched a missile with a range of 1,930 kilometers (1,200 miles) and two months ago the country test-fired two more ballistic missiles with the phrase “Israel must be wiped out” etched onto them in Hebrew.

Military officials claim that the launches demonstrate to Israel that Jerusalem is within missile range, in a bid for increased leverage and deterrence against potential Israeli adversaries. However, some international analysts view the ballistic missile tests as flouting the 2015 nuclear deal.

The US, France, Britain and Germany each decried the launch as "destabilizing and provocative" and called for a new round of UN sanctions against Iran. A special UN committee found that the ballistic tests violate the Security Council mandate, and cautioned that Tehran may be using the 2015 nuclear deal as cover to creep toward developing ballistic missiles capable of delivering nuclear weapons.

Tensions with Iran continue to mount after American and Russian officials confirmed last month that Iran test-fired an advanced rocket system which analysts view as a cover for intercontinental ballistic missile research.

Iran countered that because it has agreed to not develop nuclear weapons under the deal, none of its missiles could conceivably carry a nuclear weapon.

The Israeli Prime Minister instead seeks from the Obama Administration a massive $4.5 billion-per-year appropriation. Sources suggest that Netanyahu is willing to hold out on an agreement, on the belief that the hawkish former Secretary of State, Democrat Hillary Clinton, will succeed Obama in office.

The issue of Israeli security remains a critical theme in the US presidential election with only one candidate, Democratic insurgent Bernie Sanders, willing to challenge the prevailing wisdom of the Washington security establishment on expanding US military aid to Israel.