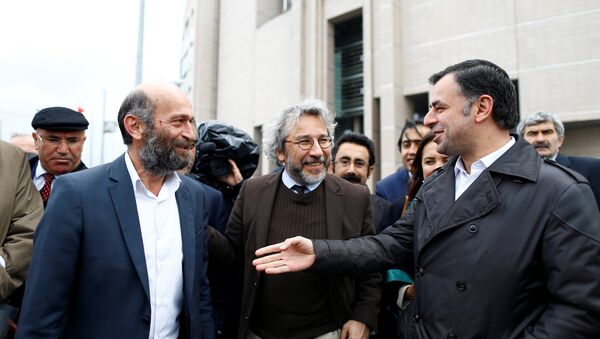 © REUTERS / Osman Orsal
Subscribe
Two journalists from Turkey's leading newspaper Cumhuriyet have been sentenced to five years in prison for revealing state secrets, but the case against them is purely political since the footage they published only confirmed what everybody already knows about Ankara's activities in Syria, Turkish journalist Zeynep Oral told Radio Sputnik.

​However, the charges of terrorism and espionage that were levied against them are baseless because the supposed state secret that they divulged has been well known for some time, Zeynep Oral, President of PEN Center Turkey and a columnist for the daily newspaper Cumhuriyet, told Radio Sputnik.

Palace Coup? Davutoglu May Be 'Last Prime Minister of Turkey'
"In fact both Can Dudar and Erdem Gul were put on trial for spying and terrorism, for attempting to put down the government and so many things, they were even prosecuted as terrorists, but the court acquitted them of all of these."

"They are only being punished for what they have written. The court insisted that they have revealed 'state secrets.' Those secrets are not secrets; everybody knows about them, there are tons of publications about them, it's not a secret any longer, this has already been published before."

Oral believes that the current state of journalism in Turkey is the worst she's seen in her 45-year career, and has resulted from the government's political interference in the media and arbitrary use of the court system.

"Now there is uncertainty, you can be prosecuted for anything you write. The same article can be written by different names and one will be prosecuted and the other will not be prosecuted. For me this is a completely political court case, it has nothing to do with justice," Oral said.

At first the Turkish government claimed the trucks were only taking humanitarian aid to Syria, then changed their story and said they were providing arms for the Turkmen in Iraq.

"Then the Turkmen said no, we're not receiving any arms from the Turkish government."

"Then Mr. Erdogan declared, 'I shall not let them go free, they'll have to pay for this.'"

"I think the court obeyed the orders of Mr. Erdogan."

EU Under Pressure Over Turkey Migrant Deal, Press Freedoms
Oral said that while Turkey has a secular constitution, religion has been playing a greater role in political under the current government.

"In the last ten years we have made a lot of concessions in the field of secularism. The education is being changed, the law system is being changed. The president of the parliament is saying, 'we should change our constitution and take away secularism.'"

"All the resonances are becoming more and more religious. Of course, for me, that is unacceptable, not understandable, it's a counter-revolution I would say."

Turkey has recently become important to Europe "for the first time" because of its deal over the migrant crisis, but while the EU expresses concern about authoritarianism there, it will not interfere in support of European ideals regarding human rights, particularly freedom of expression, Oral said.

"They are ready to do anything to save their profits, their territory, I won't say their ideals."

"Profits and benefits are more important than ideals, these days, for the EU."