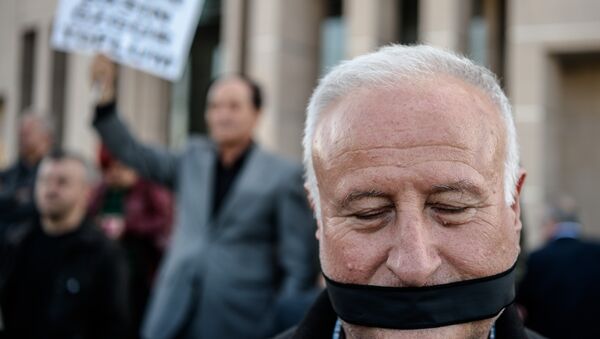 © AFP 2021 / Ozan Kose
Subscribe
Member states of the European Union are coming in for more criticism on World Press freedom Day (May 3) over its deal with Turkey on migrants, amid criticism of President Recep Tayyip Erdogan's crackdown on the media.

Politicians Say Turkey Deal Shows Europe 'Divided, Paralyzed and Weak'
The EU has struck a deal with Turkey, under which all new "irregular" migrants and asylum seekers arriving from Turkey to the Greek islands after March 20, whose applications for asylum have been declared inadmissible, are being returned to Turkey.

Under the agreement, the EU will resettle a Syrian from Turkey to the EU for every Syrian returned to Turkey from the Greek islands. Critics say the deal is a breach of human rights and possibly illegal.

On World Press Freedom Day, 3 May 2016, the High Representative of the EU Federica Mogherini said in a statement:

"The right to freedom of opinion and expression includes freedom to seek, receive and impart information. It is a key component of democratic governance and development. People need to be fully informed to be able to form an opinion and participate in decision-making processes that affect their lives."

"On this day we celebrate #WorldPressFreedomDay" @FedericaMog on behalf of the EU #WPFD2016 https://t.co/VR22sOQw70

​"Freedom of information also contributes to better governance as it enhances transparency in public affairs and can be used as a tool to make governments accountable for their actions, in particular when access to information results in the exposure of human rights violations or corruption practices.

"The EU is committed to continue promoting and protecting freedom of opinion and expression worldwide. It condemns the increasing level of intimidation and violence that journalists, Human Rights Defenders, media actors and other individuals face in many countries across the world when exercising the right to freedom of opinion and expression online and offline," she said.

However, many critics of the EU-Turkey deal point to the clampdown on media freedoms within Turkey and say the deal is immoral and should not be implemented until Erdogan's government conforms to EU principles on the freedom of the press.

"The European Union must not settle for just reminding the Turkish authorities of the principles of media freedom. It must exercise all of its potential leverage. There can be no question of resuming EU accession talks while Ankara visibly tramples on basic European values. If the EU continues to yield to blackmail regarding migrants, it will give the impression of abandoning the principles on which it was founded."

​"Until now, the European Union has demonstrated culpable weakness in response to President Recep Tayyip Erdogan's attacks on the media. But ‘business as usual' would be incomprehensible after he seized control of the main opposition media group in such a brutal manner while Donald Tusk was in Ankara. Is the EU determined to let itself be humiliated?" he said.

000000
Popular comments
Is the EU capable of holding to its principles.Apparently not as this demonstrates.The worrying question is where will it end?The unravelling of the EU is gaining pace as many of the member states object to moves to pacify Turkey and semi include it without giving it full membership status.