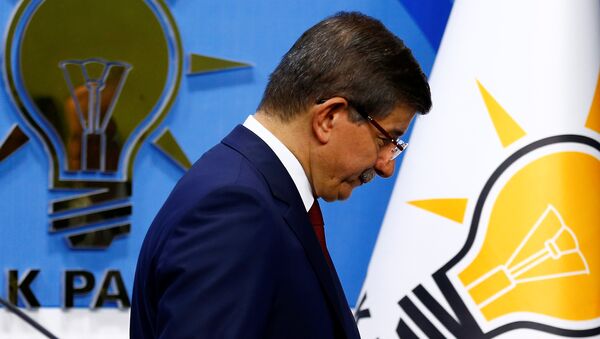 © REUTERS / Umit Bektas
Subscribe
The editor of the Turkish newspaper Hurriyet, Ertugrul Ozkok, believes that the resignation of Turkish Prime Minister Ahmet Davutoglu is the first step toward dictatorship in Turkey.

However, Ozkok believes that the most likely candidate for this position is Turkish Minister of Justice Bekir Bozdag. At the same time, he stated that taking into account Bozdag's inability to make his own decisions, Ahmet Davutoglu was apparently the "last [real] Prime Minister of the Turkish Republic".

"The most likely candidate for this position, Justice Minister Bekir Bozdag, is used to receiving orders and is not a leader," German newspaper Deutsche Wirtschafts Nachrichten (DWN) wrote, referring to Ozkok's statement.

In 2013, another Turkish journalist, Murat Alperen, revealed Bozdag's nickname given to him by his colleagues. Due to his subservience, his own party members called him "Bekir, the girl" and "Bekir, our girl," Alperen wrote for the newspaper Sözcü.

"His appointment could signify the first step toward the introduction of a presidential system, which the Turkish leader seeks to implement," DWN wrote, citing Ozkok who compared Davutoglu's resignation to a "coup".

On Thursday, Davutoglu confirmed media reports that he would step down from the post of the ruling Justice and Development Party's (AKP) leader and consequently the post of the country's prime minister after an extraordinary meeting of party leaders scheduled on May 22.

According to media reports, the reason for Davutoglu's resignation was a secret power struggle between him and Erdogan.

choticastile
7 May 2016, 21:01 GMT
000000
davutoglu will always stay in the shadow government in turkey since he is one of the main ideological leaders of the neo-osmanism wishes