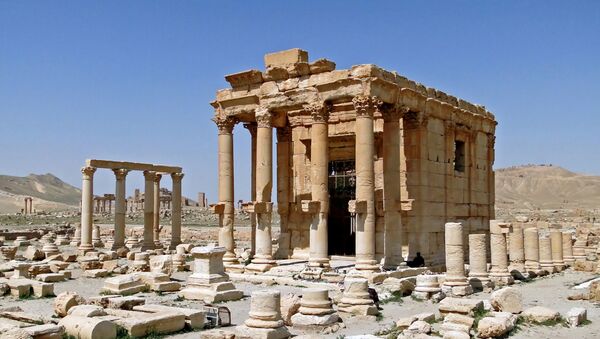 © Wikipedia / Bernard Gagnon -
Subscribe
The liberation of the ancient city of Palmyra by Syrian and Russian forces has become arguably one of the most important victories in the war against global terrorism in the last several years. Unfortunately, some Western archeologists have joined their countries' political and media elites in trying to turn the victory into a political sideshow.

Rising From the Dead: Palmyra a Month After Liberation (PHOTOS)
The victory, Russian online news and analysis journal PolitRussia recalls, "was particularly symbolic because the [Syrian and Russian] military were able to rescue one of the greatest cultural monuments in the world from the [Daesh] barbarians."

Unfortunately, the publication adds, some groups have now attempted to put a damper even on this victory.

Soon after the city was liberated late last month, an odd story appeared in some mainstream media, France's Le Nouvel Observateur citing an appeal by an 'international group of respected archeologists' who urged UNESCO not to "hand Palmyra over to Russia," and not to allow Russian archeologists to be given the right to restore the city unilaterally.

The group, including archeologists Michel al-Maqdisi, Frank Braemer, Michal Gawlikowski, Marc Lebeau and Andreas Schmidt-Colinet, and Shirin International, an organization ostensibly devoted to saving Syria's ancient heritage, launched a petition to "put an end to a situation where Russia [alone] manages the monuments in Palmyra." The archeologists noted that they were troubled by reports that UNESCO supposedly had a special arrangement with Russia concerning the ancient city's restoration.

Russian Deminers Defuse Over 18,000 Explosive Devices in Palmyra (VIDEO)
The experts explained that "although we know of the recent presence of experts from other countries in Palmyra, [the right] to the restoration of Syrian heritage cannot be appropriated unilaterally by one side; first of all, it must take place as a result of a national consensus [in Syria]. In addition, Palmyra's status as a UNESCO World Heritage Site implies that the international community must be involved in the restoration. This consensus will be the fruit of long process on several fronts – political, social, scientific and technical."

Commenting on the archeologists' appeal, PolitRussia noted that while "caring for humanity's cultural heritage is no doubt laudable, what's unclear is what caused such concern among respected scholars in this case. Russian scholars have no claim to any exclusive role in restoration works."

In fact, the journal added "the first foreign expedition which visited Palmyra after its liberation was Polish. Between April 7-17, archeologists from the University of Warsaw worked in the ancient Roman city. And no one interfered with their work. On the contrary, they arrived at the official invitation of the Syrian Department of Antiquities, and the Russian military was directly or indirectly involved in ensuring their safety."

As for Russian archeologists' participation in the restoration, PolitRussia recalled that there was nothing strange that they too be involved in the work, given that the Russian Hermitage Museum is one of the largest archeological centers of the world, whose staff have unique experience in restoration work, including with antiquities from Palmyra.

Ultimately, the journal suggests, "it's very curious to see this surge in activity on the need to 'preserve' the cultural heritage of the Middle East right now, and to 'protect' it from Russia. Why, previously, had these guardians calmly looked on over the past several years as the region's historical and archeological heritage was savagely destroyed by terrorist groups who have a relationship with the US or its allies?"

How World Media Cover Russian Orchestra Performance in Palmyra
Western archeologists "merely 'expressed concern' when the Taliban blew up the Buddhas of Bamiyan, burned the letters of the Assyrians in Kandahar and blew up Persian alters in Jalalabad." The Taliban, PolitRussia recalled, has its roots in the Mujahedeen, a collection of Islamist militants fighting the Soviets in Afghanistan throughout the 1980s, and who were supported by the US's ally, the UAE, throughout the 1990s.

At the same time, the journal added, Western commentators watched just as quietly as museums were ransacked and antiquities stolen in Cairo, Egypt during the so-called 'Arab Spring' revolution there.

The same can be said of the cultural heritage of Syria and Iraq, which has been similarly harmed following the rise of Daesh and other jihadist groups. "The weapons and equipment given to the 'moderate opposition', in a mysteriously coincidence, instantly found themselves in the hands of the terrorists," the journal sarcastically noted.

"But now, it is Russia which is the main enemy of Palmyra and of global archeology," PolitRussia sardonically added. In fact, the 'clumsiness' of this propaganda is similar to that of the worst days of the Cold War.

"Someone finds it beneficial to forge a public image of wild Russian barbarians [who are] incapable of any creative work. And all means are good for this purpose – even the use of well-known archeologists. This isn't good…"

"What should we do in this atmosphere of hatred and mistrust?" PolitRussia asks. The main thing, it suggests, "is to think less about what is going on in the minds of Western elites and to do what we consider necessary, without a backward glance toward anyone. As historical experience shows, seeking the approval of the West, in almost any area, comes at a great cost." Maybe, "if the West does not approve, then we are on the right track!" the journal facetiously concludes.

000000
Popular comments
Western archeologists are full of hot air. They are opportunists. No approval is needed from the illiterate west barbarians. Do as we wish. The west has no capacity to dictate as they are worthless.
copius
8 May 2016, 14:26 GMT4
000000
Western archaeologists are not only full of hot air, they are brainwashed by the US and its vassals to condemn anything that is done by Russia. Even if Russia saved a western leaders life they would be condemned for some made up fault. This is scandalous behaviour from the west.
Robert Klimenko
8 May 2016, 14:38 GMT7
000000
Newsfeed
0
New firstOld first
loader
LIVE
Заголовок открываемого материала
Access to the chat has been blocked for violating the rules . You will be able to participate again through:∞. If you do not agree with the blocking, please use the feedback form
The discussion is closed. You can participate in the discussion within 24 hours after the publication of the article.
To participate in the discussion
log in or register
loader
Chats
Заголовок открываемого материала
Worldwide
InternationalEnglishEnglishMundoEspañolSpanish
Europe
DeutschlandDeutschGermanFranceFrançaisFrenchΕλλάδαΕλληνικάGreekItaliaItalianoItalianČeská republikaČeštinaCzechPolskaPolskiPolishСрбиjаСрпскиSerbianLatvijaLatviešuLatvianLietuvaLietuviųLithuanianMoldovaMoldoveneascăMoldavianБеларусьБеларускiBelarusian
Transcaucasia
ԱրմենիաՀայերենArmenianАҧсныАҧсышәалаAbkhazХуссар ИрыстонИронауОssetianსაქართველოქართულიGeorgianAzərbaycanАzərbaycancaAzerbaijani
Middle East
Sputnik عربيArabicArabicTürkiyeTürkçeTurkishSputnik ایرانPersianPersianSputnik افغانستانDariDari
Central Asia
ҚазақстанҚазақ тіліKazakhКыргызстанКыргызчаKyrgyzOʻzbekistonЎзбекчаUzbekТоҷикистонТоҷикӣTajik
East & Southeast Asia
Việt NamTiếng ViệtVietnamese日本日本語Japanese中国中文Chinese
South America
BrasilPortuguêsPortuguese
NewsfeedBreaking
04:00 GMTBoJo's National Insurance Tax Rise May Hinder Post-COVID Recovery, Cause Unrest in UK, Scholars Warn
03:42 GMTChina May Have the Edge in the Final Frontier With its Satellite-Crushing Weapon
01:50 GMTCongress to Get Tough on Armed Services After 2,000 Military Firearms Stolen During the 2010s
01:21 GMTOld Habits: Big Tobacco's Annual Cigarette Sales Increase for First Time in 20 Years, FTC Reports
01:00 GMTBlinken Speaks to Sudan Prime Minister, Welcomes His Release - State Dept.
YesterdayChina Pushes Vaccination Program Ahead as Lanzhou Placed in Lockdown to Contain New Covid Cases
YesterdayAre Manchester United and Antonio Conte a Good Fit?
YesterdayAngry Emojis Only!
YesterdayThe Spice Must Flow: ‘Dune’ Sequel Greenlit After Successful Opening Weekend at US Box Office
YesterdayRight-Wing Chilean Newspaper Sparks Outrage After Tribute Article to Hermann Göring
YesterdayUS Intelligence Unit Seeks Way to Detect Radio Signals That Indicate Data Breaches
YesterdayUS Senate Confirms Ex-Republican Senator to Be Next Ambassador to Turkey
YesterdayUnited Airlines Pilots, Workers Refusing to Fly With Unvaccinated Colleagues, Court Docs Reveal
YesterdayEx-Lehman Brothers Exec Predicts 3 More Years of Inflation, Tech Stocks to 'Get Crushed'
YesterdayBacking for Increased US Police Budgets Surges to 47% Amid Rise in Violent Crime – Poll
YesterdayAt Least 6 Killed, 10 Injured in Attack by IS Militants in Eastern Iraq - Source
YesterdaySection of Biden's Infrastructure Bill for Fighting Climate Change Reportedly Tops $500 Billion
YesterdayManchester United Hierarchy Reportedly Split on Ole Gunnar Solskjaer’s Future
YesterdayTexas Becomes Latest US State to Pass Anti-LGBTQ Law, Banning Trans Girls From Female Sports
YesterdayLe Pen Says Hungary's Orban Backs Launch of Hard-Right Alliance in Coming Months