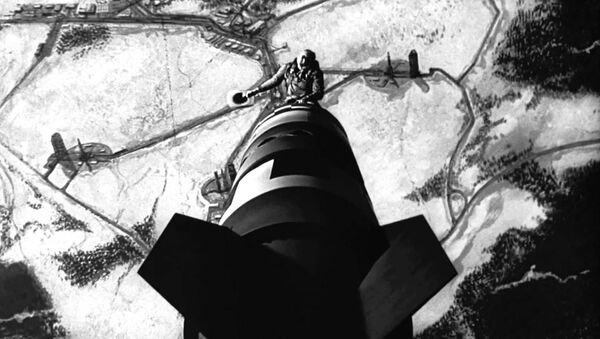 Washington's decision to invest $1 trillion in a new generation of nukes contradicts common sense, US academic Michael Brenner notes, stressing that there is no imminent danger to the US' security.

Despite his pledges to reduce the role of nuclear weapons back in 2009, US President Barack Obama has launched an all-out nuclear modernization program; the initiative also includes deploying new-generation atomic weaponry in Europe.

In his article for Consortiumnews.com entitled "Learning to Love the Bomb — Again" referencing the 1964 political satire black comedy "Dr. Strangelove," Michael Brenner, a professor of international affairs at the University of Pittsburgh, argues that the Obama administration's nuclear program lacks sense.

"By now we are accustomed to bizarre foreign policy moves from the White House. The last 15 years have seen a series of initiatives that defy reason and good sense… Against this backdrop, the program to spend $1 trillion on developing an upgraded arsenal of nuclear weapons with expanded capabilities suggests a return to 'normal' — that is, the bizarre," Professor Brenner writes.

"Yet this vast expenditure for no apparent strategic purpose has generated little debate whether within the Obama administration, political circles or the public," he adds.

Pentagon’s Hypersonic Missile Could Inadvertently Spark Nuclear War
What makes the situation more complicated is that Washington has focused on "downsized, easy-to-use variety" of nuclear bombs.

In 2015 the US tested its new B61 Model 12 nuclear bombs — "the small, the stealthy and the precise," — in Nevada. The B61 tests were immediately denounced by Russia and China as "irresponsible" and "openly provocative," The New York Times wrote in January 2016.

It seems that the Cold War history lessons remain largely unlearnt. There is no Warsaw Pact or the USSR; Russia does not pose a threat to the United States. It would be ludicrous to consider North Korea or Iran an imminent menace to Washington as well.

In this light there is no reason to kick off a nuclear modernization program, the US scholar believes.

Furthermore, large amounts of nuclear weapons spread across NATO military bases may increase the risk of "nuclear war by miscalculation."

"That raises the question of whether Washington has an interest in keeping open the option of making first use of nuclear weapons against Iran or North Korea… First-use — even as doctrine — also sets dangerous precedents. It weakens the nuclear taboo entrenched since 1945, and it thereby heightens anxiety in a manner that increases the risk of accidental or miscalculated use," Brenner warns.

These so-called Tactical Nuclear Weapons (TNWs) "are inherently dangerous," the academic stresses. He recalls that during the Cold War era Washington flooded Europe with TNWs of a different caliber.

"It was hoped, [TNWs] could be used to counter a massive conventional attack without triggering an all-out nuclear war," the professor remarks.

In other word, it was planned to use TNW in the event of a strike of a "conventionally superior" force.

"There is no conventionally superior, or equal, potential adversary out there. The United States enjoys conventional superiority over all conceivable enemies," the professor states, asking "what is the point of constituting a high-tech nuclear force now to be centered on TNWs, precision-guided munitions and low-yield warheads?"

"The titanosaur sized price for that dubious gain hardly seems worth it when the much cheaper alternative is the promotion of qualified generals and Intelligence officials. The pity is not realizing at the outset that this greatest of all dinosaurs is actually a White Elephant," Brenner stresses.

US Deploys 3 B-52 Nuclear Bombers to NATO Exercise in Europe
Meanwhile, opinions are voiced, assuming that the Pentagon's new hypersonic missiles could be one day loaded with nuclear warheads.

At the same time, the US decision to station new B61-12 atomic weapons in the EU member states has prompted concerns among Europeans.

In his interviews with Sputnik, French journalist and founder of Agora Erasmus political organization Karel Vereycken has repeatedly stressed that the initiative pushed by NATO and Washington has nothing to do with European security. On the contrary, Europeans have found themselves caught in the US' nuclear trap.

"The Belgian peace movement 'Vredesactie' ("peace action") declared that…the nuclear weapons stationed in Europe are not mere relicts of the cold war, but their use is still actively prepared," Vereycken told Sputnik in October 2015.

In his March interview with the Russian Kommersant newspaper Mikhail Ulyanov, director of the Russian Foreign Ministry's Department for Non-Proliferation and Arms Control, underscored that the modernization of the nuclear bomb arsenal means that NATO is headed for long-term violations of the Treaty on the Non-Proliferation of Nuclear Weapons (NPT).