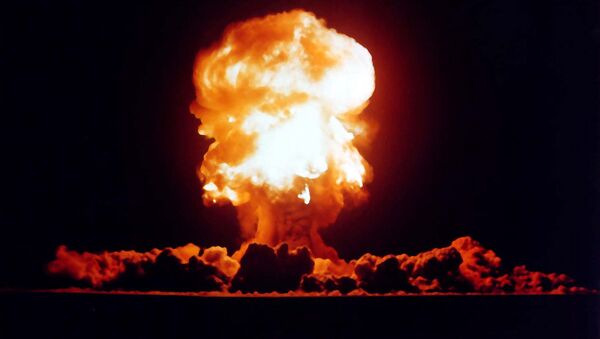 CC BY 2.0 / International Campaign to Abolish Nuclear Weapons /
Subscribe
The United States has made assurances that its new hypersonic missile will only carry conventional warheads. But critics aren’t convinced the Pentagon can resist a nuclear temptation.

In an attempt to keep up with Russia and China, the US is developing its own range of hypersonic aircraft and missiles that can travel at speeds between Mach 5 and Mach 19. The Pentagon’s Defense Advanced Projects Research Agency (DARPA) has spent over $34 million on multiple hypersonic projects.

Defense officials maintain that the technology is being pursued primarily in the interest of developing a reusable hypersonic jet.

"We see this as being a long-range program," said David Walker, the US Air Force deputy assistant secretary for science, technology and engineering, according to Defense One.

The technology would also, theoretically, allow the military to stop focusing on stealth technology. Traveling at Mach 19, any craft would simply outrun radar.

"Our ability to operate in a stealthy mode is starting to lose its advantage because of the advanced radars," said Dick Durbin of DARPA, according to Defense One.

"We think that speed is going to give us that extra advantage."

While Pentagon officials insist that nuclear warheads are not a consideration for any hypersonic aircraft, anything traveling at such high speeds inherently threatens to destabilize global security.

"I see hypersonics as weapons whose only plausibly logical use would be a niche role in a strategic first strike vs. Russia or China," physicist Mark Gubrud told Defense One. "So the nuclear standoff already exists, and this road is taking us closer to war."

If either Russia or China were to spot an incoming hypersonic craft, they would have no choice but to assume the incoming threat carried a nuclear warhead, lest they be caught off-guard.

Beijing is, in fact, already considering this possibility.

"Some analysts in China suspect that the United States is seeking the ability to eliminate Beijing’s nuclear deterrent in a first strike – and if Washington successfully develops hypersonic missiles, Beijing’s confidence in the credibility of its nuclear deterrent would only erode," Tong Zhao of the Carnegie Endowment’s Nuclear Policy Program wrote for the Bulletin for Atomic Scientists in June 2015.

"Already, some in China are discussing whether Beijing should, in the face of new conventional threats to its nuclear arsenal, alter its unconditional no-first-use policy."

If the Pentagon achieves its goal, it could only increase the speed at which the world appears to race toward a nuclear apocalypse.