EU 'Has Turned Into a Henhouse Without a Rooster' 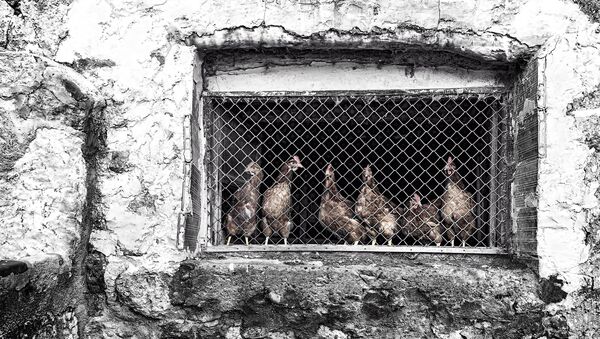 The European Union has turned into a 'chicken coop where the chickens have scattered in all directions', says German political scientist Alexander Rahr, commenting on the implications of the results of the Dutch referendum on the EU-Ukraine Association Agreement.

According to the expert, the 'disintegration' of the EU project is not at stake, but the referendum served as another sign that the collapse of the political aspect of a united Europe may soon be at hand.

"The European Union is unlikely to fall apart right now. But it seems to me that the end of Europe's political union has arrived, since, as has been demonstrated once again, the mechanism that exists in the EU requiring a consensus in crucial decisions does not work," Rahr said, in an interview for the Rossiyskaya Gazeta newspaper.

61.1% Dutch Against EU-Ukraine Association, Turnout 32.2%
"On the whole, we can see that the EU, in recent months, has been unable to make decisions by consensus; this is true in so far as sanctions against Russia are concerned – new sanctions have not been thought up, but at the same time the old sanctions are not removed; it's also true as far as the issue of refugees is concerned. A deadlock has emerged, showing the feebleness of Brussels' policy."

The problem, Rahr said, runs very deep. Within the vast EU bureaucracy, in spite of the idea of continental unity, every official continues to advocate his or her narrow national political, economic and geopolitical interests, rather than common 'European' interests.

"Within this huge bureaucratic monster, the national interests of individual states never disappeared. And each commissar or department head continues to consider themselves first of all a Pole, an Estonian or a German, rather than simply a European."

"Therefore, a real European identity was constructed only on paper; in reality it does not exist. And when the EU began to falter, its current leaders proved unable to make any decisions. The institution is like a hen house where the chickens have scattered in all directions, all shouting something. But there is no leader, no main rooster, who would put things in order," the analyst emphasized.

Kiev Waiting for Dutch Proposals to Address ‘Referendum Situation’
Commenting specifically on Dutch voters' rejection of the EU-Ukraine association deal, Rahr said that he sees it as an indication of the cracks emerging between European elites and their publics. "In their mentality, the Dutch somewhat resemble the British. The results of the referendum in the Netherlands are the first sign that the lower classes, i.e. the people of Europe, are beginning to protest against those at the top. They want to see a less bureaucratic Europe, which would do little more than protect citizens' interests," instead of "conjuring heroes of the refugees and creating an ideological superstructure over the European Union."

The referendum, he emphasized, was a big blow to both European and Ukrainian elites, including President Poroshenko, "who sought to demonstrate that he is implementing the dream of part of the Ukrainian people and leading the country to the West." As for Brussels, for them "the agreement was necessary for those politicians who used Ukraine for their own careers and put all their energies into the Maidan."

"Now, the Ukrainians have been given a clear message: Europe, which had promised them a great deal, is in no hurry to fulfill its promises. The results of the referendum are a blow not only to the further prospects of Ukraine itself, but to other countries of the Eastern Partnership associated with the EU," ostensibly including Moldova, Belarus, Georgia, Armenia and Azerbaijan.

Dutch Ukraine-EU Referendum Results Put a 'Nexit' on the Horizon
Moreover, Rahr suggested, "if a similar referendum was held in other EU countries, the result, I think, would be similar to the Dutch one. People [did not] vote against Ukraine because they do not like Ukrainians. In reality, the majority of Europeans simply do not want a further enlargement of the EU; they fear a new flow of refugees; they fear criminals flowing in to the Old World from the east and south."

"Ordinary people feel uncomfortable; they feel that European culture is changing. This is not a right-wing populist slogan, but the sentiment felt in Europe."

In any case, Rahr noted, Brussels, and the EU's major national leaders, will not change their trajectory as a result of the referendum. "The bureaucracy in Brussels who tied their political careers to this association, like Mrs. Merkel, for example, or the French government, cannot simply accept that the game is lost, or that there will be no association. It is possible that some half-measures may be taken, as happens with solutions to other problems in united Europe," including Britain, or Greece.

Ultimately, as far as what happens next for Europe, the political scientist suggested that the supranational bloc may end up reverting to its status as a common economic platform, and move away from united politics.

"I think it's too early to bury the EU, but I think that it will turn more and more to what it has always been – a common market, thanks to which Europe saw the formation of a unique economic and social system, where people, for decades after the Second World War, lived better than they had ever before. But we must acknowledge that the idea of a political union…a United States of Europe with some center, which makes decisions in Brussels or via a mechanism for making decisions by consensus, has failed completely."