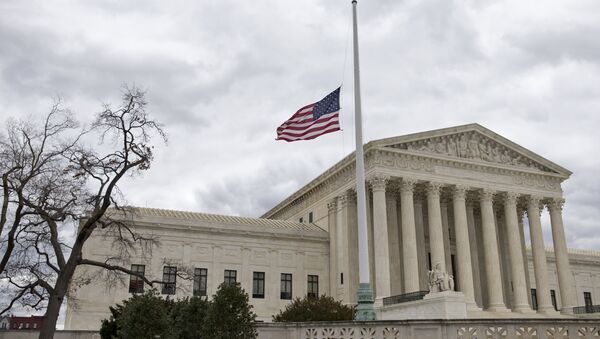 New research by a University of Baltimore law professor, published in the Conversation, has revealed that growing US income inequality is the fault of the US Supreme Court, claiming the court’s decisions since the 1970s have created conditions that benefit corporations over individuals.

Professor Michele Gilman states that, with the death of Justice Antonin Scalia, the Obama administration has the perfect opportunity to tilt the scales on what was a 5 to 4 majority against the interests of the working class.

Gilman observes a trend toward arbitration, citing five decisions authored by the late Justice Scalia that pushed both worker and consumer claims out of the courts. Prior to the change, an injured or disadvantaged worker or a slighted consumer could pursue litigation, which saw a trend toward companies offering settlements rather than risking a jury trial.

However, with decisions including the 2011 AT&T v. Concepcion case, litigants are now forced into arbitration, often in locations thousands of miles from where an injury or claim occurred. Further, arbitration programs are often funded by the same corporate interests whose cases they are hearing.

The AT&T case involved a class action lawsuit in which thousands of claimants alleged that they were charged over $30 for what was advertised as a free cell phone. Scalia not only said the case should go to arbitration, but that every individual who claimed that he or she had been defrauded must take their claim to an offshore arbitration hearing in the Bahamas, despite knowing that travel costs alone were greater than each individual claim.

Similarly, in Wal-Mart v. Dukes, Scalia wrote an opinion stating that women workers could not bring a class action suit against the retailer for paying and promoting them less than their male counterparts, on the assertion that Wal-Mart was simply "too big to discriminate" and inferring that, for a claim to go forward, claimants had to show proof that the retailer intended to create harm.

Similarly, the US Supreme Court has ruled on a number of cases limiting the ability of labor unions to collect dues to pay for collective bargaining efforts on behalf of employees.

In 2010, the Supreme Court ruled on Citizens United v. FEC, holding that Congress could not limit the proliferation or funding of SuperPACs. In layman’s terms, an ordinary person has a $2,700 limit on how much they can donate to a political campaign, but, with lawyers and money, a person can set up an organization to donate billions.

In effect, many US Supreme Court decisions of the past 30 years, in particular those decisions pushed forward by Scalia, ensured that workers would not have a day in court, could not unionize, and could not have their voice heard equally in a political arena against the  noise of billionaires.