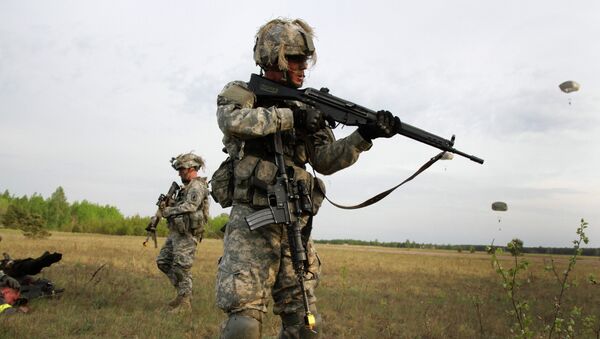 © AFP 2023 / PETRAS MALUKAS
Subscribe
International
India
Africa
While the Obama Administration reduced US military presence in Europe, the Pentagon has plans in place to quickly reverse those drawdowns as soon as the president leaves office in 2017. The stated reasoning is to deter an "aggressive Russia."

In 2012, US President Barack Obama removed two of the four US Army brigades stationed in Europe. The move was meant to cut down on military costs, as the administration shifted its focus to the Asia-Pacific region.

But the Pentagon is preparing to rearm the European continent as soon as  Obama’s term ends.

"As part of the United States commitment to increased assurance and deterrence, US Army Europe (USAREUR) will begin receiving continuous troop rotations of US-based armored brigade combat teams (ABCT) to the European theater in February 2017, bringing the total Army presence in Europe up to three fully-manned Army brigades," according to a blog post from US European Command.

The plan also calls for the Army to "begin storing 'static' equipment, known as Army Prepositioned Stocks (APS), within Europe for contingency operations."

Placed on nine-month rotations, the ABCTs will be ready for "rapid deployment of ground forces in response to contingencies throughout the region. It provides additional combat power, if and when needed."

The justification for this dramatic buildup relies, once again, on "Russian aggression."

"This army implementation plan continues to demonstrate our strong and balanced approach to reassuring our NATO allies and partners in the wake of an aggressive Russia in eastern Europe and elsewhere," said General Phil Breedlove, commander of US European Command (EUCOM).

"This means our Allies and Partners will see more capability – they will see a more frequent presence of an armored brigade with more modernized equipment in their countries."

Earlier this month, US Chairman of the Joint Chiefs of Staff Gen. Joseph Dunford warned that Russia represented what he considered to be a grave threat to the Western world.

"First, the Russian military presents the greatest array of threats to US interests," he said in a speech to the Center for Strategic International Studies.

"We owe our leadership the clarity on the military dimension of dealing with this challenge," he added.

While the West has accused Moscow of invading eastern Ukraine, which the Kremlin has consistently denied, the former has failed to provide evidence for their allegations. Washington also claims that the Crimean referendum, in which 96% of voters supported a reunification of the peninsula with Russia, is not valid.