Does Saudi NATO-Like Alliance Have Its Eye On Iran? 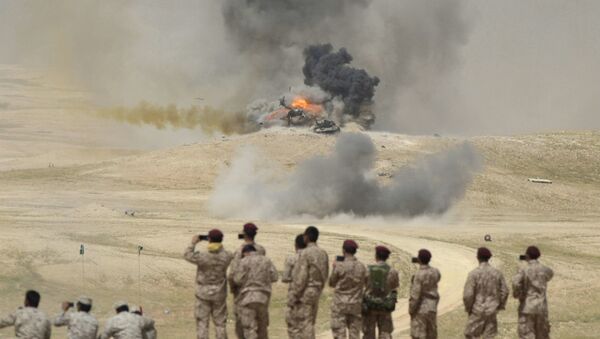 © REUTERS / Abedullah al-Desori
Subscribe
Saudi Arabia has proposed to create a NATO-like alliance, consisting of Islamic countries. It will not act against any country and its primary goal will be the fight against terrorism and threats like Daesh in the Arab world.

Radio Sputnik discussed the issue with Fahad Nazer, former political analyst at the Saudi embassy in Washington and a non-resident fellow at the Arab Gulf States Institute.

“Back in December last year when Saudi deputy crown prince who is also the Minister of Defense, Prince Muhammad bin Salman held a press conference and announced the formation of what he called an Islamic military coalition. The prince made it clear that the purpose would be to combat terrorism and terrorist groups regardless of their ideological orientations. He said that the coalition will not only target Daesh exclusively but will target all groups.”

Nazer further spoke about the joint military exercise in Saudi Arabia which just concluded last week and how it was the biggest in the history of the region.

“The Saudis are pursuing this very seriously and as I said when the announcement was first made in December people had some doubts as to how serious an endeavor this would be.”

Saudi Arabia Welcomes Steps Bringing Security to Syria
The analyst further spoke about this alliance and about the fact that Pakistan may develop the framework of this alliance. “Over the past few years Saudi Arabia has taken an assertive stance. I think Saudis have made it clear that they will play the leading role in this and we will see how much of a role Pakistan will actually play in this.”

Nazer then talked about where Tehran fits in this equation. “They have not joined yet, there is no indication that they intend to join it. There is a prospect of joining maybe months or years down the lane in case of relations improving but some people view it as an anti-Iran coalition but I don’t think that’s the purpose of it.”

Regarding Washington, the analyst said that senior US officials welcomed this. “Both secretary Carter and Kerry welcomed it. They both publically called for more assistance in the anti-Daesh coalition so this is meant to compliment the US led coalition.”

He further spoke about how, on the other hand, this new coalition may demonstrate that the US led-coalition is not enough to fight Daesh.