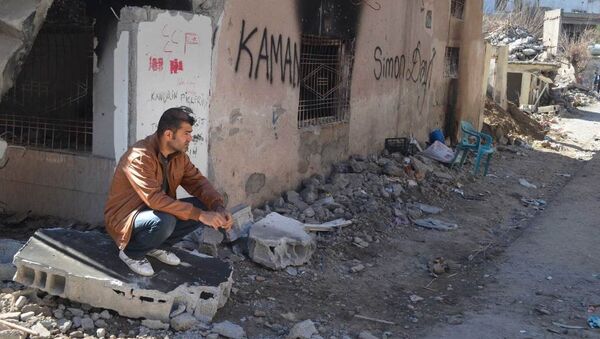 © Sputnik / Ömer Faruk Baran
Subscribe
As the Turkish government continues its crackdown on Kurdish communities in the country’s southeast, Elif Sarican of the Kurdish Student Union speaks to Radio Sputnik’s Loud & Clear about the destruction, as well as the silence from Turkey’s Western allies.

"People are only allowed outside of what you may be able to call half-houses, or half-destroyed houses, from 5:00 AM to 7:30 PM," Sarican tells Loud & Clear host Brian Becker, referring to the curfew in the town of Cizre.

Sarican likens what’s happening to Cizre to Kobani, the Syrian city where Kurdish fighters liberated the city from Daesh, also known as IS/Islamic State. But while the US and other Western powers may have supported the actions of the PYD and the Kurdistan Workers’ Party (PKK) when fighting terrorists, they look the other way when these groups struggle for freedom against the Turkish government.

"Of course, the PYD and the Kurdish forces in Syria have been quite tactical in terms of collaborating the US and [its] airstrikes, but the US’ aim is to use the Kurds in Syria to defeat ISIS so then they can be named the heroes," Sarican says.

"But of course, [the US] cannot use the Kurds to defeat Turkey, because Turkey is an ally of theirs."

Colonialism has had a detrimental impact on Kurds for decades, forcing communities across the region to conform to arbitrarily chosen national boundaries. In an effort to forge a national identity, the Turkish government criminalized certain aspects of Kurdish identity.

"It was illegal to speak Kurdish until about a decade ago, and even after it was made legal, it still wasn’t allowed social. It was frowned upon. It was taboo," she says.

"The very important propaganda of the Turkish state is that they disguise what they are doing behind a so-called war on terror," Sarican adds.

While a ceasefire was previously agreed to between the Turkish government and the PKK, Sarican points out that Ankara was never serious about implementing peace.

"It was very easy for them to collapse the peace process because it wasn’t a genuine process to begin with," she says. "It was an opportunist collapse of the peace process so they could capture nationalist votes, but it’s also important to be aware of the fact that the peace process wasn’t genuine on the Turkish state’s behalf from the very beginning."

Sarican encourages those who are aware of the situation in Turkey to speak out, since the mainstream Western press is doing very little to cover devastation.

"Very little media are…reporting what the Turkish state is doing to the Kurds," she says. "There is an election coming up in the US. Urge these people interested in the election to talk about these issues."