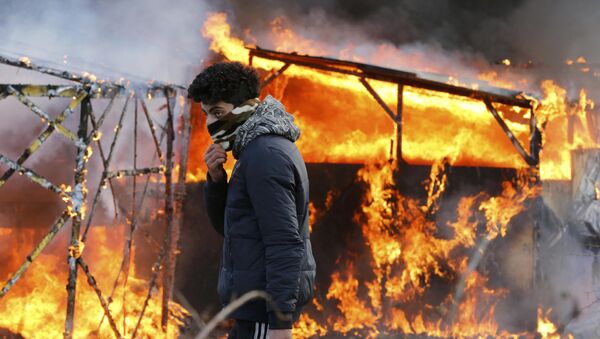 The forced removal of migrants from the camp in Calais led to clashes with authorities. Police launched tear gas, and a number of homes were set on fire.

Last week, a court ruled that a portion of the refugee camp in Calais would be cleared, citing concerns of smuggling. The dismantling began early Monday morning, sparking unrest among the refugees. 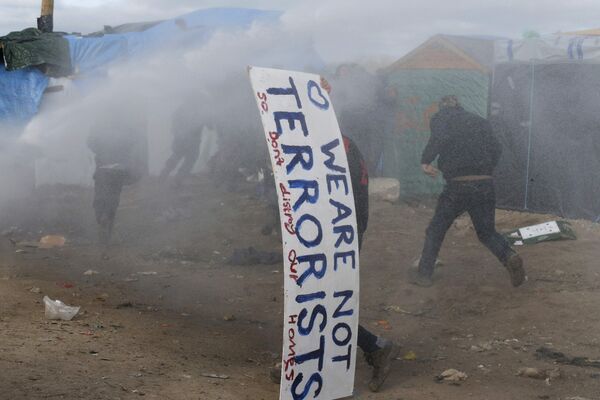 A man takes cover with a sign that reads, "We Are Not Terrorists - So Don't Destroy Our Homes" as water canon and tear gas push back migrants.
© REUTERS / PASCAL ROSSIGNOL

Between 150 and 200 migrants and activists threw stones at police, who responded by firing canisters of tear gas.

"We can confirm that this morning dozens of policemen went onto the camp and they started to remove part of the camp called part 9," Samuel Hanryon, of Doctors Without Borders, told Sputnik. "We know that this afternoon they launched tear gas in the camp and some violence occurred against migrants.

"There is violence there now, and they are using tear gas against migrants."

At least three makeshift shelters were set ablaze, potentially by the heat of the teargas rounds. Others were lit on fire as an act of protest. 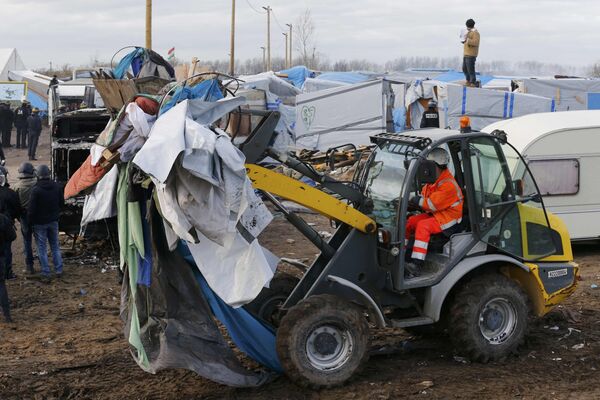 One individual was arrested for attempting to prevent workers from dismantling the campsite, where roughly 3,500 refugees from the Middle East have lived for the past year. An estimated 305 individuals are unaccompanied children. 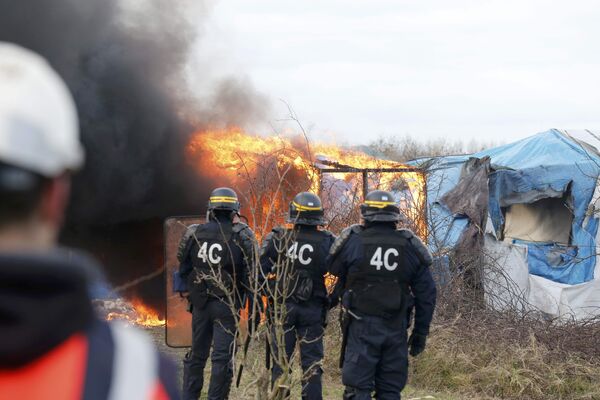 The decision to clear the southern part of the camp has been criticized by rights activists. Some stressed the ethical problem of uprooting people who have nowhere else to go, while others have pointed out that shutting down the illegal portion of the camp will do little to address the prefecture’s security concerns.

"The migrants are just going to run and hide in the wood and the police are going to have to go after them," said activist Francois Guennoc of the Auberge des Migrants refugee support group.

He also claimed that some migrants would be housed in converted shipping containers.

Monday also saw clashes between migrants and police in Macedonia, where teargas was fired on hundreds attempting to storm the border.